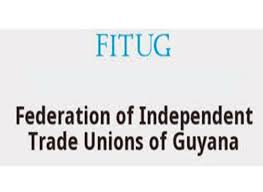 See full statement by the Federation of Independent Trade Unions of Guyana (FITUG) on the recent remarks made by Hamilton Green and Lincoln Lewis:

The Federation of Independent Trade Unions of Guyana (FITUG) has seen media reports as it concerns calls by former Prime Minister Hamilton Green and longstanding GTUC General
Secretary Lincoln Lewis for President David Granger to disregard the Constitution and to
impose his will and way. While Mr Green, for his part, has sought to walk back his comments, attributing them to a slip of the tongue, Mr Lewis remains, so far, silent.

The FITUG finds the comments by both erstwhile gentlemen to be completely out of place
and they must be forthrightly and roundly condemned. While both men may have their
political convictions and have shown where they stand, in our view, they have crossed the
line.

We consider it wholly unacceptable for anyone, much less persons such as Messrs Green and Lewis, to advocate openly for the President, or anyone for that matter, to throw away the Constitution. We hasten to remind them and all Guyana that the Constitution at its preamble says, among other things, “We the Guyanese people…Forge a system of governance that promotes concerted effort and broad-based participation in national decision-making in order to develop a viable economy and a harmonious community based on democratic values, social justice, human rights, and the rule of law…”.

Those sentiments, we contend, were not chosen lightly but were enshrined after considerable thought. Therefore, to seek to wish them away, as some are, is highly irresponsible. The Federation is also most surprised, and we daresay perplexed, by the comments of Lincoln who we have known for a long time. Mr Lewis, we recollect, has long advocated embracing the Constitution. He is known for his consistency advocacy of the Constitutional provisions that seek the involvement of civil society in governance. Therefore, we find him now calling on the President to act not only contrary but to throw away the scared rules of our land deeply disturbing.

Also, what message is Lincoln, as a trade unionist, sending to employers? What would be his reaction to employers ignoring conditions set out in Collective Labour Agreements? We have to wonder whether he fully considered his remarks. The FITUG holds that the comments by both individuals certainly do no credit to their credibility, waning or not. As persons who have been in the arena for as long as they have they ought to have known better and definitely acted with more responsibility.

They certainly must shoulder the blame for their comments and no pacification can erase the dark blots on their characters. We hold that Guyana as a democratic society must uphold and abide by our Constitution and all laws. To seek to disregard or to ignore the rules, as some now openly seek, cannot be considered proper in any modern society.