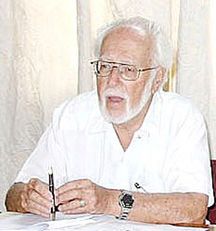 A sixteen-year-old girl from the Corentyne Coast, along with her grandmother, a friend who drove the car and a family friend, left for the Cheddi Jagan International Airport for a flight to the US in the midst of the violence promoted by David Granger and Joseph Harmon on the West Coast Berbice, believing that they would be safe, protected by the police.

She has described the terrible experience in a letter to the Stabroek News in simple, straightforward but graphic detail of the horror of a victim, of the ugliness of racial hate and ignorance promoted for political purpose.

I read the letter as so many others, I hope, have done, wanting to weep for my country and for that young girl and her family.

They first encountered the road blocked at No. 1 Village where they waited for almost three hours before the police were able to clear the road.

She writes: “the police force could not stop the riot and so, the Guyana Defence Force was sent to deal with the situation.” It begs the question, why not? A question which needs to be answered going forward.

Having crossed the Berbice River Bridge, arriving at No. 5 Village, confronted with more trouble, they were forced to hide, first in a gas station, but then went on thinking it was a peaceful protest, passing through Bath Settlement under GDF control, until they arrived at Hopetown Village.

At Hopetown they encountered both soldiers and police clearing the road from the two trucks that the rioters had set on fire. There, they got trapped. “Suddenly our car and a pick-up truck were attacked,” she writes, “by a large number of rioters”.

Their car was surrounded. “We couldn’t go anywhere and couldn’t do anything; we were a car of Indo Guyanese. The rioters showed us little mercy.”

This young girl, the absolute horror and fear of this moment forever inscribed in her mind, tells that, “all we could see were their eyes full of rage,” as the attackers smashed at the windscreen of their car, got into the car and then dragged them out.

“I clearly remember the first thing they did as they entered the car. One of the men ripped my cross from off my neck, which I wore for safety all my life.”

This young girl remembers seeing her grandmother being dragged out of the car and robbed of everything she had. The “protestors”, in turn took her bag with her phone, wallet, passport and Green Card. They then beat up the driver who refused to give up the car keys.

It was a young black Guyanese man who came to their rescue. She describes him as “our guardian angel”.

The young man managed to get them safely back into their car when, luckily for them, the GDF arrived on the scene. But, they were trapped in Hopetown, unable to escape going forward or going back, as she writes, the GDF were failing to control the rioters. Again, it begs the question, why?

Again, they were rescued, this time by “a young mixed race couple”, who led them into and hid them and their car in their yard. They remained trapped there for a further five hours. They had been robbed of their phones and money but had recovered their passport and Green Card which had been thrown on the ground by the “protestors”.

They were sheltered and cared for throughout the night by the young couple who lent them their phone to call their family and gave them $3,000. They were finally able to leave for home in the morning when the rioters had been dispersed by the army, even then, on their way out, bottles were being thrown at their car.

At the Berbice Bridge they joined dozens of other cars with families who had been similarly attacked. She writes: “some were kissing the ground and thanking God that they were alive”.

In concluding her letter, this young Guyanese girl gives thanks to the “Afro-Guyanese man” who rescued them and the “mixed neighbour” who harboured them. “You are good people,” she wrote.

She and her family, her grandmother who became sick after her terrible experience and countless others like them who have kept their silence, remain haunted and traumatised, unbelieving that fellow Guyanese would do this to them, but remembering, still, that other Guyanese of the same ethnic origin of those who attacked them came to save them.

Who, I ask, must bear responsibility and take the blame for organising and directing this deliberate attempt to use race hate as a means of destabilising the entire country, if not David Granger and Joseph Harmon?

Innocent, ordinary Guyanese who happened to be of Indian descent were brutally attacked and robbed by other Guyanese who happened to be of African descent, all of whom were living, working and playing together, until the politics of race was used as a political weapon to drive them apart by the leaders of a party unwilling to accept electoral defeat.

But there are others, too, in our country, who must bear responsibility for keeping silent when their voices would have made a critical difference when these same men and women sought to steal an election. Freddie Kissoon, in his unique style, put it best when he asked the question, where were the voices of TGI and the Red Thread when “the most blatant electoral frauds seen anywhere in the world,” was taking place, but who now are suddenly calling for unity but are unwilling “to identify Granger and Harmon as the culprits”?

The founder of Heal Guyana, Sharon Lalljee-Richards, has, importantly, added her organisation’s voice to placing the responsibility for the injury and the trauma suffered by so many others, like this young 16-year-old girl, when she points out that David Granger and Joseph Harmon, when they “visited the grieving relatives of the Henry family…took it upon themselves to utter irresponsible words which served to instigate an outburst of violence among protestors who were demonstrating their discontent over the brutal murders of Isaiah and Joel Henry.”

Clearly, it would be insufficient now for our government to rely solely upon the results of the police investigation into these murders to provide a solution to what has occurred over these past six months.

President Irfaan Ali must now direct the holding of a Commission of Inquiry, bodied with internationally respected jurists, to ensure that all of those persons responsible for attempting to steal the results of the March 2 elections and all of those persons responsible for promoting and directing the racial violence which has followed, are brought to justice.

Perhaps, our people may then grasp the fact that only a cohesive country can progress and prosper and that no matter from where we originated, Guyana is our country and that those dedicated to the politics of race hate and division will be duly punished for the criminal enterprise which they practice.