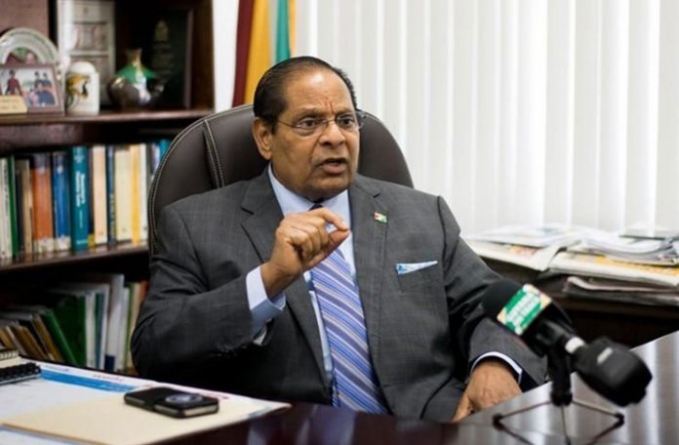 See below a column written by Prime Minister Moses Nagamootoo:

DIALOGUE ON THE WAY FORWARD

The APNU+AFC Coalition of Parties has stated that it remains “open to dialogue” on the way forward for Guyana.

The Coalition said it is doing so “in the national interest, and with a view to maintaining stability and peace”. It assured further that “the APNU+AFC Coalition is prepared to act responsibly to bring a resolution to the ongoing political situation”.

The on-going political situation of course is the prolonged delay in the declaration of results for the March 2 elections, including a 33-day recount process and attendant legal proceedings, that have combined to place Guyana in its deepest crisis ever.

For the see-far pundits reading the magical tea leaves, the Coalition’s statement is politically and strategically correct. It was both an invitation to the major opposition People’s Progressive Party (PPP) for talks and a curtain-raiser to what seems to be a positive signal for power-sharing.

In my July 12 column I had said that dialogue on the way forward might sound like a worn-out cliché. However it is intended as a road-map that seldomly works well or smoothly, but it is always useful if only to momentarily steer antagonists away from the dangerous precipice.

Since then I have seen the emergence of the little-known “The Guyana Renewal Project” group which is calling for a period of inclusionary democracy. In a Communique, the Project stated:

“There are deep concerns and fears about the ethnic polarization and unseemly racism that haunts the land. Guyanese citizens at home and abroad want a homegrown solution. They recognize that now is the time for dialogue.” (July 19, 2020)

The Project Group, which bundles Guyanese intellectuals here and abroad, has made specific proposals for its inclusive governance idea. These include rotation of the posts of the presidency and prime minister (as in Israel and Afghanistan), and equitably shared Cabinet portfolios between the two major parties or blocs.

“With the political stalemate, the reality of the conundrum of inter-ethnic rivalry between the African and Indian communities, and unfair ethnic and class competition, most Guyanese realise that, based on their previous experiences, the solution is not an elective despotism (a winner-take-all government), nor a dictatorship. Either situation would definitely widen ethnic and class disparities with grave consequences.” (Stabroek News, July 19, 2020).

He noted the fragility of a victory for either of the two major parties that is based on a one-seat majority with just over a percentage point lead. He predicted that even “a PPP/C Government cannot be successful if it monopolises governance…”

For Guyanese citizens, not versed in nuances of political opportunism or skullduggery, the call for dialogue at this time is an SOS distress signal. They see the Guyana ship of state in danger, and they want all hand on deck to literally save their souls, as they battle the COVID pandemic and try to cut corners for survival.

For the PPP to come at the table would require a tough decision by visionary leaders. They could use history as a guide, and avoid impetuous responses.

On August 12, 1977 then President Forbes Burnham rejected an offer made by Opposition Leader Cheddi Jagan for the PNC and the PPP to form a “National Front Government”. Sadly, to this day, over forty years later, Guyana is still bleeding from her wounds due to ethno-political division and the animosity between these two major parties.

This time around the shoe is on the other foot, and it is the Government that holds out the olive branch to the Opposition! If history were to repeat itself, yesterday’s farce could be today’s tragedy.

That failure of political leaders to heal “the incompatibility and animosity that characterize their relationship” was noted by former American President Jimmy Carter after his visit during August, 2004.

Recalling the post-1992 promise of healing the political division and ethnic polarization, President Carter expressed dismay at what he described as 50 years of fierce rivalry:

“Instead of achieving this crucial goal of inclusive and shared governance, the Guyanese government remains divided with a winner-take-all concept that continues to polarize many aspects of the nation’s life”. (August 14, 2004)

I have met President Carter on three separate occasions, and with his Center routinely. At the top of their concerns were proper continuous voter registration, campaign financing laws, constitutional reform and a technical/non-political elections commission instead of the current partisan set-up.

Guyana rejected good advice at its peril. The failure to effect meaningful constitutional and electoral reforms has resulted in an unholy trinity of a bloated voters list, use of dirty money and influence-peddling, and an almost paralysed elections commission. These have combined to degrade into a vulgar sideshow of fraud, what otherwise should be free and credible elections.

Much of this is due to ethnic rivalry, which was highlighted by Jason Calder in his article, “Ethnic Conflict threatens democracy in Guyana” (March 26, 2020).

Calder, who founded the NGO, “Saferworld”, knows the local turf having observed several elections in Guyana with the Carter Center, including the 2020 elections, over a sustained 25-year-period.

Calder described as a “toxic system” the winner-take-all constitutional formula that pits the Indo and Afro Guyanese communities against each other in every election. He dug deep into our past when, he said, the CIA manipulated Guyana’s ethnic rivalries for Cold War ends.

He said that the ethnic violence unleashed during that era still scars the country today, saying:

“Every nation struggles with its demons, but the US government bears unique responsibility for some of Guyana’s.”

It is in this fresh context that we should see the critical importance of dialogue. The alternative would be a vicious circle of conflict, confrontation and non-cooperation.