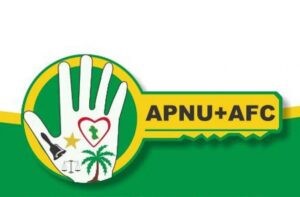 The incumbent APNU+AFC today claimed that there was  “a carefully orchestrated plan to oust a legitimately elected government and to implement regime change”, a contention which has been dismissed by the PPP.

In a statement APNU+AFC also maintained that GECOM must not include alleged “fraudulent” votes in a final declaration.

APNU+AFC has been completely isolated by what has been seen in the local and international communities as outlandish and baseless claims about the elections. APNU+AFC has also been the intended beneficiary of several attempts by senior GECOM officials to rig the March 2nd general elections.

A statement by APNU+AFC follows:

APNU+AFC CALLS FOR  “VALID VOTES” IN RECOUNT TABULATIONS. VOTES FROM COMPROMISED EAST COAST DEMERARA BOXES AND OTHERS CANNOT BE INCUDED.

The APNU+AFC  notes  GECOM’s current position that fraudulent votes be included in the final tabulations emerging from the 33 day recount process and insists that all fraudulent votes must be excluded.

We recall that in our press release of June 7, 2020 APNU+AFC noted with disappointment the decision of GECOM to tabulate and include over 11,000 fraudulent votes found in 47 ballot boxes from the East Coast of Demerara and others revealed in the laborious recount process which have been carefully quantified and discrepancies verified from authorizing agencies.

In 63 letters of correspondence to Chair and The Secretariat of GECOM over the last three months, the Coalition requested that these and other issues which were “parked” be dealt with.  It speaks volumes to note that the APNU+AFC received 6 responses to their 63 letters.  As a major stakeholder in these elections we find this totally unacceptable and reiterate that fraudulent votes must be excluded in a final count. These concerns must be addressed if we are to move forward.

The APNU+AFC entered into the recount process with the expectation that the misgivings regarding the Mingo declarations would be investigated.  Unlike 1997 President David Granger did NOT have himself sworn in secretly, but suggested a recount as we have nothing to hide. What came out of the process was indications of massive fraud and “rigging” perpetrated and to the benefit of the PPP.

Gazetted Order 60 of 2020 outlined an approach and as Appeal Court Judge Brassington Reynolds in his ruling stated “Counsel for the second-named respondent [Chairperson of Gecom, Justice Ret’d Claudette Singh] admitted that GECOM did set as its objective, determining the final credible count of votes ”

With this in mind we find it unconscionable that the fraud found in 1261 infected boxes, revealed under the watchful eyes and in the presence of local and international observers, members of the diplomatic community and election agents from all the political parties received no condemnation.  These groups with their continued silence on this fraud have displayed their absence of fairness and impartiality which has spawned a suspicion and lack of trust amongst the more that  236,000+ APNU+AFC supporters who voted in these elections. This threatens the stability of Guyana.

The threat of COVID-19, the unfolding events in Venezuela and the constant threatening comments directed to GECOM, the President, Government officials and supporters when GECOM has not yet made a declaration is a clear indication of a carefully orchestrated plan to oust a legitimately elected government and to implement regime change by some entities and not a genuine desire to assist Guyana at his difficult time..
These developments are contrary to the democratic principles this coalition Government has held dear.

APNU+AFC calls for a  credible vote, since in the bundle of tabulated votes rests several votes which are fraudulent.
Decisions in relation to issues raised by APNU+AFC are awaited.

An edited version of the PPP response follows:

The People’s Progressive Party (PPP) notes the latest inane and incredulous ramblings in the form of a public statement, dated July 26, 2020, issued by the APNU+AFC Coalition. This press statement, clearly, cannot be intended for sane, right-thinking Guyanese.  It seems written for a ‘captured’ David Granger who needs repeated convincing of the line being pushed by the Coalition’s Joseph Harmon and others and will no doubt be taken to Mr. Granger as ‘evidence’ of the delusion notion of an electoral victory.

It rehashes a set of issues that have long been overtaken by events and judicial pronouncements from both the High Court and the Caribbean Court of Justice (CCJ).  It continues to recite the ridiculous and unsubstantiated allegations made by APNU+AFC at the recount exercise; it accuses the PPP of rigging; it attacks Order 60 of 2020 and it quotes Justice Brassington Reynolds’ ruling in the Court of Appeal in the Eslyn David case, which was set aside by the CCJ.

“… (the author)  erases the existence of a report produced by David Granger’s most “legitimate interlocutors”, the CARICOM team, who dismissed their allegations of irregularities as erroneous, unsubstantiated and of nuisance value only, while endorsing the recount as credible and transparent and calling for the results of the recount to be used as the basis for the declaration of the final results of the elections.

The author of this statement further ignores a 60-page judgement from Guyana’s highest court, the CCJ, which not only set aside Brassington Reynolds’ decision in the Court of Appeal in the Eslyn David case, but also vacated Keith Lowenfield’s fraudulent report to the Guyana Elections Commission as well as endorse the recount process as legal, fair and credible. In consequence, the CCJ ruled that the results from the recount process must be used as the basis for the declaration of the final results.

Similarly, the statement omits to mention a word of the Chief Justice’s recent ruling in the Misenga Jones case, in which she dismissed a case based upon the identical sentiments expressed in the very statement.

Finally, the delusional author of this statement repeats the outrageous allegation of a national and international conspiracy to oust the APNU+AFC from Government. If anything at all, this statement is proof to the world that the rigging cabal has clearly lost their minds and remains a threat of danger to Guyana and its people.