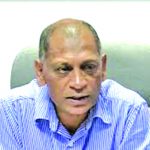 The Sunday Chronicle carried a story that was patently a lie. They claimed that Bharrat Jagdeo and Irfaan Ali are among the persons who did not submit their Integrity Commission declaration forms. This is required by law and the offending persons are subjected to a fine and as much as one year in prison. Both Drs Jagdeo and Ali have publicly stated they submitted their required forms and have always done so since it became law in 2000. Did the Chronicle fabricate the story? According to them, the information was provided to the papers by the Chairman of the Integrity Commission.

The Commission did publish a list of names that included many APNU/AFC Members of Parliament (MPs) and Ministers. The list also included senior Government officials, including the Speaker of the now dissolved Parliament. The Commission had indicated that it would publish more names. It has not done so. It has also never been upfront and straight to the public it represents about the status of David Granger. Mr Granger had admitted he was not in compliance, he had not completed his declaration, he was working on it up to late last year. No one has come forward with a status update regarding Mr Granger’s declarations. The nation does not know.

Clearly, the Integrity Commission is betraying its purpose and the Guyanese people. Its job is to ensure all relevant officials submit on a timely basis their integrity declarations. For several years, the Commission has complained that officials are not treating their obligations under the law seriously. But its protestations have become annoying. It has the power to act against those committing an offence. Rather than act, it chose impotence. The Chairman’s excuse was he had no money to publish the names of offenders. I sympathise with the Chairman, knowing that APNU/AFC has tried to suffocate the Commission by limiting its budget. But for the publication of the names he needed no money – two daily newspapers which are available nationally and internationally in both print and Internet versions offered to publish the names at no cost. The offer was not formally taken up.

Former President Donald Ramotar posited the other day that important national institutions which must play a significant role in ensuring justice, freedom, and democracy in Guyana are abrogating their roles by trying to placate all parties, not carrying on their roles with objectivity. The truth is that many of the institutions are fearful to conduct themselves in a fair and impartial way. When there are instances where the PPP and its leaders attract negative attention, these institutions are not timid in expressing themselves and in taking action. But when they need to act because of flagrant disregard for the law when the offending party is the PNC/APNU/AFC, these same institutions seek refuge through impotent general statements.

The silence of the Integrity Commission is a case in point. Because the offending party is the Government, it acts as if it has no power. Right at this moment, the Ethnic Relations Commission (ERC) is another of the major shared governance institutions that is not conducting itself in the interest of the nation. In the last year, there have been statements and actions by APNU/AFC and others that clearly are offensive and clearly falling in the ambit of the ERC to act. Instead, it acknowledges only in a general way that certain statements and actions are illegal and promote ethnic and racial tension. But it generalises its condemnation, desperately seeking not to identify the offensive party. The ERC cannot fulfil its role in shared governance, in promoting a healing environment and in ensuring racial and ethnic harmony by refusing to call a spade a spade. The statements from the ERC, thus far, are nothing more than silence in the face of unambiguous racist and ethnic bias.

The same kind of partial and unbalanced approach has been seen with other national institutions which are part of the shared governance architecture. GECOM has failed to fulfil its obligations in a fair and unbiased manner. National TV and newspapers, those paid for by taxpayers’ money, clearly see themselves as mouthpieces of APNU/AFC. The many other institutions tasked with defending national interests have become mere tentacles of the governing party. Serious concerns are being expressed at the attempts to control the Judiciary. For those who still talk about constitutional reforms for shared governance, we have a Constitution that already caters for extensive shared governance, but the institutions tasked with such roles are not embracing those ideals.