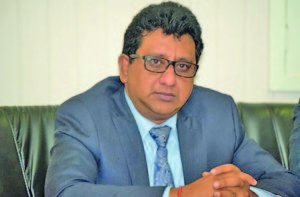 “Judgement! Thou art fled to brutish beasts and men have lost their reason,” from Shakespeare’s Julius Caesar, aptly describes the words, conduct and thoughts of those who believe they can steal the next Government. They include the most educated to the uneducated. Were the situation and the consequences thereof not so tragic, it could have been a human marvel.

For thousands, to persuade themselves, that a Chief Elections Officer can prepare a Report, which is to be used as the basis for the declaration of an election result, by not using the votes cast by the electorate and counted by election officers but some other statistic is simply incomprehensible. Further, to think that they can actually secure the assistance of a court of law to compel that such a Report be used as the basis of the declaration of the election results is a manifestation of lunacy. My information is that the Executive of APNU spent hours at a meeting last Saturday, discussing these and other options on how such a perverse Report can be used to form the basis for the declaration of the election results. Just imagine, highly educated people, including lawyers, meeting and discussing how they can steal an entire Government! These are plots that producers in Hollywood have used to make blockbuster movies, such as, Ocean’s Eleven, Twelve and Thirteen. The exception here is that this is happening in real life.

Another manifestation of the insanity, is the misinterpretation of clear language expressed in the Constitution, in the laws, or in judgements delivered by the Courts, so as to make them consistent with their abominable narratives. I heard the likes of Dr. David Hinds and Vincent Alexander, both of whom are university professors and are the recipients of the highest form of post graduate tertiary education from foreign universities, assert that their understanding of the Judgement of the Caribbean Court of Justice, in the Eslyn David case, invalidates both the Recount Order and the Recount processes. These two men have made these statements publicly knowing full well that millions of people, across the region and elsewhere in the world, following this election saga would have tuned in and heard the Judgement delivered by the Court, as well as, may have read a copy of it which is available on the Court’s website. These millions would have heard and read that rather than impugn, the Court endorsed both the Recount Order and the Recount process.

Another illustration of the idiocy, is the argument being advanced that Article 177 binds the Guyana Elections Commission to accept any Report produced by the Chief Elections Officer, irrespective whether it is fraudulent or not. Inherent in this argument is that a Chief Elections Officer can unilaterally prepare a Report which bears no reflection of the will of the electorate expressed at the elections and such a perversity must be declared as election results. These people simply do not recognize that such would be a “selection” of a Government by the Chief Elections Officer and not an “election” of a Government by the people. This is not democracy but the very antithesis of it.

Another symptom of this complete lack of reason, is the vilification and vitriolic abuses that have been hurled at every human being, organization and institution of high standing who and that have condemned the utter madness being displayed by the rigging cabal and their supporters. These public condemnations have come from every corner of this hemisphere. How the rigging cabal and their supporters have convinced themselves that all these persons and organizations are wrong and they are right, is a lesson in malevolent human psychology.

I read with utter disbelief certain statements attributed to Raphael Trotman published in the press. Trotman is quoted as saying, “the political situation in Guyana is Guyana problem” and, “small, scarcely populated Caribbean Islands must keep out of the Guyana problem.” Trotman further stated that people who have constituencies of three hundred to four hundred people cannot “rightly tell us what to do or even give us proper guidance as what to do.” This is perhaps the most insular, arrogant and untutored statement ever made by a politician in the post-independent Caribbean. His leader, David Granger, recognized CARICOM as the most ‘legitimate interlocutor’ in these very electoral processes.

Trotman is a lawyer and was once viewed as one of those politicians with the right ideology to take Guyana to a higher plateau. He functioned in the high Office of Speaker of the National Assembly for several years. He was educated at the University of the West Indies and at Hugh Wooding Law School, the two most premiere educational institutions in the Caribbean. His father held several constitutional offices in those very small islands, arguably, after fleeing Guyana during the height of PNC’s dictatorship. His sister is married to a highly placed politician in Grenada and served as Solicitor General for that country. He chose that very small island for his second wedding.

These small islands have rescued tens of thousands of Guyanese who ran away from the brutalities and economic hardships during the PNC’s dictatorship. I can cite a million more reasons why Trotman’s utterances render Shakespeare’s “Judgement! Thou art fled to brutish beasts and men have lost their reason”, a self-evident truth but space would not permit it.
It is insanity, not COVID, that is the real pandemic in Guyana.