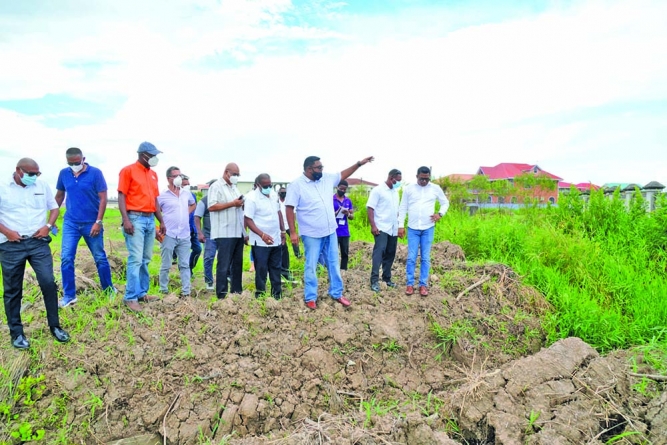 Almost 50 international and local companies, including some with a number of major infrastructural projects under their belt, are interested in the contract to design and build the new Demerara River bridge.
This was confirmed in an exclusive interview with Public Works Minister Juan Edghill. While he did not divulge names, Edghill did confirm that many of the companies which purchased bid documents and attended meetings with the Ministry have an international track record of large-scale projects that include the building of bridges.

“Almost 50 companies would have registered, most of them would have bought the bid documents and many of them attended a virtual meeting we had on November 17th. But from the companies who have contacted us, enquired to get information, paid for the bid documents and signed the Non-Disclosure Agreement, it is close to 50.”
“Very reputable international companies who would have build bridges and would have been engaged in civil works at an international level, have been engaging and enquiring and participating,” the Minister added.

Edghill also noted that many of the companies, even if they do have a local partner, are international names. He further explained that they will ultimately know the exact number of proposals submitted when tenders close on December 4.
The Government is aiming to have a new fixed-span, four-lane bridge constructed over the Demerara River that will be able to bridge the East and West Banks of Demerara from Nandy Park to La Grange, reduce traffic build-up and last for at least the next 50 years.

According to the Government’s invitation for Expressions of Interest (EoIs) and prequalification of qualified contractors, firms are being sought to submit their proposals for both the design of the bridge and for available financing options. All EoIs for the new bridge are to be submitted to the National Procurement and Tender Administration Board (NPTAB) by 14:000h on December 4, 2020.
President Dr Irfaan Ali, who conducted a walkabout at proposed sites associated with the new Demerara River bridge back in September, made it clear that the bridge must be completed within four years and promised that they will begin inviting contractors to submit Expressions of Interest for the project this weekend.

The construction of the new bridge will be a timely one, as the East Bank is notorious for its heavy traffic congestions due to the current retractable bridge. Floating at 1.25 mile, the Demerara Harbour Bridge is a strategic link between the East and West Banks of Demerara.
It facilitates the daily movement of thousands of vehicles, people, and cargo. The structure was built in the 1970s but was opened in July 1978 with the expectation of lasting only 10 years. However, some 42 years after, it is still floating.

The former APNU/AFC Administration was originally going to go with another retractable, three-lane design for the new bridge but after immense criticism had switched to a fixed, four-lane proposal.
Not long after it took office in 2015, the APNU/AFC Government engaged in efforts to have a feasibility study for the project. However, the awarding of that contract was marred in controversy, with the Auditor General, Deodat Sharma, pointing to major breaches of Guyana’s financial laws.

The Public Procurement Commission (PPC) had subsequently flagged former Public Infrastructure Minister, David Patterson for requesting from the then Cabinet that the feasibility contract be sole-sourced instead of being processed through the National Procurement and Tender Administration Board (NPTAB).
The PPC had found that after the bidding process was annulled because of non-responsive bidders, NPTAB had approved for the project to be re-tendered. But instead, Dutch company LievenseCSO was handpicked by the Public Infrastructure Ministry to conduct the study.