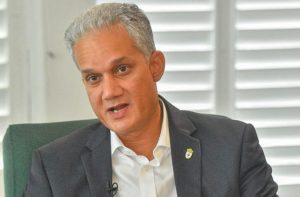 A day or two ago Mr Carl Greenidge dedicated about 14 minutes of his speech at the APNU campaign in Berbice to criticising an accomplished international anti-corruption NGO called Global Witness, and myself, Jan Mangal, a former adviser to President Granger on oil & gas.

In my role as adviser to President Granger on oil & gas, I advocated for transparency of oil contracts since the oil belongs to the Guyanese people, not to ExxonMobil nor to government ministers. I also advocated for anti-corruption, and for getting a better deal for the people of Guyana via a re-negotiated contract. Global Witness, who Mr Greenidge called “jokers”, is world renowned as the foremost anti-corruption body in oil and gas. This NGO has uncovered massive corruption amounting to billions of US dollars in the past.

Why would Mr Greenidge be against disclosing the Exxon contract information to the people of Guyana (“Greenidge says he advised against disclosing bonus – defends decision in context of Venezuela border controversy” – another newspaper reported on December 15, 2017), when his superior, President Granger, believes in transparency and believes the Guyanese people should see the oil contracts? And when his party, APNU, claims to be a transparent government? Was it not the former PPP government who were completely against sharing the contracts with the Guyanese people? Does Mr Greenidge intend to align with the PPP on this issue and not with APNU? Is that why PNC members chose President Granger to lead their party and country instead of Mr Greenidge?

President Granger is clearly a man of integrity, unique in this respect amongst Guyanese politicians, and APNU professes to be very much about anti-corruption, so why is Mr Greenidge so riled up and critical about Global Witness and myself? Does he believe we should not tackle corruption and therefore let it be part and parcel of our new oil and gas industry? Was it not the previous PPP government who were voted out in 2015 because Guyanese were sick of the corruption and arrogance? Was it not the previous PPP government who would have quickly chased out an NGO like Global Witness, and who would never have employed someone like me? So which side is Mr Greenidge really on?

Have I not made my assessments clear about the risks posed to our oil & gas industry by corruption, and the risks posed by the behaviours witnessed under the previous PPP government, and sadly now those same behaviours being exhibited by some members of this government? Have I not indicated how positively important some of President Granger’s decisions on oil & gas have been?
Were Mr Greenidge’s attacks on Global Witness and me personal or party views? If personal, why is he so intimidated by transparency and anti-corruption? Why did he abuse 14 minutes of precious APNU stage time? Did APNU know Mr Greenidge would use their stage to disparage the ideals of the party and President?

Guyanese need to remember Mr Greenidge has been an advocate for the foreign oil companies on some of the most important issues, such as keeping contract information secret and not re-negotiating to get a better deal for Guyanese. I believe that if the Coalition does badly in March, it will be because of “leaders” like Mr Greenidge and Mr Trotman, who never grasped the real significance of the change of government in 2015.

In summary, it seems Mr Greenidge thought he was on a PPP campaign stage in Berbice, and not on an APNU campaign stage, since most of his sentiments, expressed on stage and supported by his previous statements, were aligned with the PPP and not with APNU.