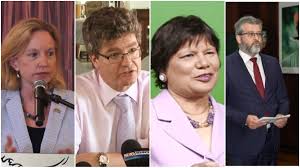 Saying that the full count of Region Four’s votes was not completed, the heads of the United States, United Kingdom, Canada and the European Union diplomatic missions to Guyana have questioned the credibility of the results released yesterday by the Guyana Elections Commission (GECOM).

As a result, United States Ambassador Sarah-Ann Lynch, British High Commissioner Greg Quinn, Canadian High Commissioner Lilian Chatterjee, and the Ambassador of the European Union Fernando Ponz Canto have urged that the Guyana Elections Commission and all relevant stakeholders complete the tabulation based on Statements of Poll (SOPs).

“Based on our observation of today’s GECOM proceedings at their Region 4 office, and the fact that the full count was not completed, we question the credibility of the Region 4 results published by GECOM today,” they said in a joint statement that was issued last evening, in wake of GECOM’s release of long awaited results for the region, albeit without the completion of an agreed verification.

In urging the completion of the count based on the SOPs, as is provided for by the law, the missions also called on all Guyanese to remain “calm and patient,” and for all leaders “to exercise responsibility and restraint.”

The United States, United Kingdom and Canada missions are among the local observer groups that were accredited by GECOM for the polls.

In a separate statement, the European Union, which also fielded a large electoral observer mission, noted that the Region Four Returning Officer declared results “before the legally required tabulation process was completed” and urged that GECOM resume the tabulation of results for the region in compliance with the law.

The results released by GECOM point to a large enough victory for the incumbent APNU+AFC to retain the presidency and a parliamentary majority, while the opposition PPP/C has said its count from SOPs in its possession shows otherwise.