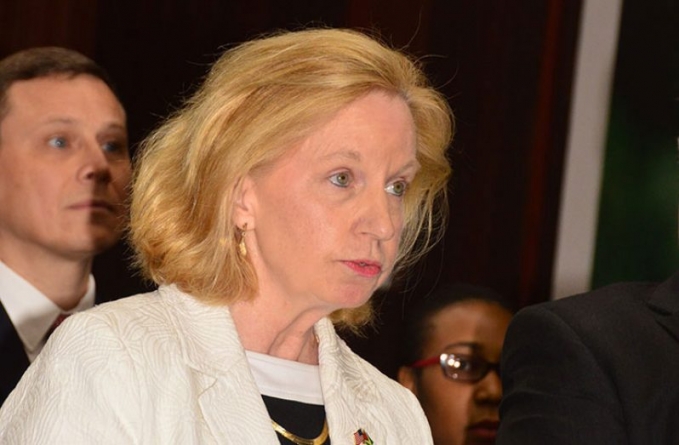 United States Ambassador to Guyana, Sarah-Ann Lynch said that if Guyana continues to thread down an undemocratic path then this could cause implicit danger for the ongoing partnerships between the two countries.

Ambassador Lynch made this remark during an engagement with the media on Thursday to discuss the visa restrictions imposed by the US on Guyanese Government and elections officials, and their immediate family members, responsible for or complicit in undermining Guyana’s democracy.

These restrictions were announced on Wednesday last by Secretary of State, Mike Pompeo, who said in a subsequent statement that Guyana’s non-democratic trajectory is dangerous for its citizens and the hemisphere as a whole.
He had noted that this move by the US sends a clear message of the consequences of subverting democracy and the rule of law, which pose a danger to not just the North American nation but also hemispheric partners.
These sentiments were repeated by the US diplomat during her interaction with the media.

Asked about what danger was the Secretary of State referring to, Ambassador Lynch explained that the US has partnered with Guyana for years in several critical areas including the security front, governance front and prosperity front. These, she noted, are in danger.

“So, we look further to working with Guyana in the future [as] a secure, stable, prosperous country, as well as region. So, there are implicit dangers in all of those areas that we would like to avoid and we believe that we can do that best by working together as we have in the past…,” the US envoy had stated.
Moreover, Ambassador Lynch further expressed that the turn of events since the March 2 elections is “highly disappointing”. She noted that after cautioning for several months about the consequences of undermining democracy, the US has stood by its words.

“We continue to hope that the will of Guyanese people will be respected and will prevail. This country has a very bright future and we look forward to partnering with a democratically elected Government in Guyana,” she asserted.
Following these visa sanctions by the US, Canada and the United Kingdom are also likely to follow suit. In fact, the UK announced that it has already started the process of putting “consequences in place” against individuals in Guyana.
Meanwhile, the US is not the only one with concerns about the impact of Guyana’s political and electoral impasse in the hemisphere.

The Organisation of American States (OAS) has been vocal on Guyana’s situation and only last week, called for the Guyana Elections Commission (GECOM) to remove persons hindering the democratic process as well as for a credible conclusion of the protracted electoral process so that the country can remain a democracy.
In fact, the Permanent Council of the OAS will be holding a special virtual meeting this Tuesday, July 21, to consider the state of the electoral process in Guyana. The meeting is scheduled to commence at 14:30h and will be live-streamed on the OAS’ various social media platform.

However, the 35-member hemispheric body is not the only group of which Guyana is a signatory that will be meeting to discuss the country’s ongoing electoral crisis.
The Caribbean Community (Caricom) is also expected to meet to discuss Guyana’s protracted electoral process. Current Chairman of the 15-member regional bloc, Prime Minister of St Vincent and the Grenadines, Dr Ralph Gonsalves recently disclosed that the leaders from the various Member States are likely to also meet on Tuesday.