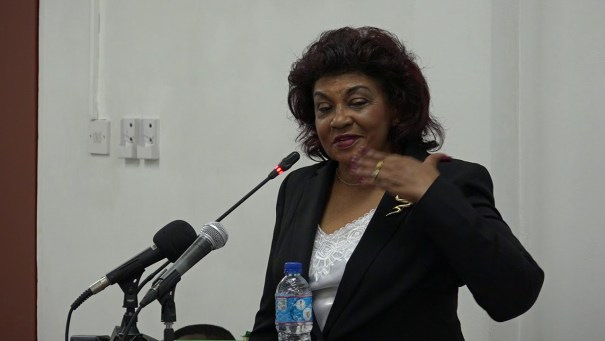 Guyanese, who made changes to their addresses during the 2019 House-to-House Registration, said they are depending on the Guyana Elections Commission (GECOM) to uphold their sovereign right to vote, and have those changes reflected on the Revised List of Electors (RLE) in accordance with the Laws of Guyana.

The call comes at a time when the Opposition – the People’s Progressive Party/Civic (PPP/C) – is insisting that no changes should be made to the RLE; but on Thursday, GECOM, under the chairmanship of Justice (Ret’d) Claudette Singh, reassured the nation that all omissions on the RLE will be corrected. Such correction, it said, is legal and within the statutory period.

In a terse statement, GECOM said that while the Opposition is pointing fingers at the Commission with false accusations of “deliberate ploy to create confusion and mayhem,” it is cognizant that the Opposition’s sole intention is to disenfranchise thousands of eligible electors who would have participated in the House-to-House Registration Exercise.
“This will not happen,” GECOM made clear.

In an article published in the Guyana Times under the headline ‘No provision in law for GECOM changes to RLE…91,000 changes “dangerous”; could lead to “mayhem,”’ Executive Member of the PPP/C, Anil Nandlall alleged that GECOM’s decision to amend the RLE to reflect changes to addresses made during the 2019 House-to-House Registration Exercise was illegal.

Regulation 37 states: “If within the period of twenty-one days after he had certified lists, the Commissioner is satisfied that any entry or omission in any list as revised pursuant to regulation 35 is incorrect through inadvertence in the course of such revision, he shall make or cause to be made the requisite correction to that list and such copy thereof as is open for inspection at any registration office and the Commissioner shall give to the person to whom such correction relates notice thereof, which may be sent by registered post to his last known address.”

Based on the legal provision outlined in Regulation 37, GECOM said it is confident that its decision to update the addresses of those registrants, who effected changes during the House-to-House Registration exercise, is in accordance with the law and does not fall outside of the statutory period.

“GECOM has a duty to ensure that the information of all Electors is accurately reflected on the Official List of Electors to avoid confusion. If that process is not done, Electors would be required to travel to their old addresses to vote. As such, those persons would be displaced and disenfranchised which could result in low voter turnout and questionable election results,” the Elections Commission explained.

In light of the allegations peddled by Nandlall, GECOM urged the electorate to be extremely vigilant of attempts to create confusion, mischief and derail the level of public confidence in GECOM to conduct free, fair, transparent and credible elections.

It assured the nation that it is working in the best interest of the electors, and will produce a credible Official List of Electors for the conduct of General and Regional Elections 2020.
Twenty-nine-year-old Akeisha Marshall is among the 91,000 Guyanese who would have made changes to their addresses during the 2019 House-to-House Registration. Marshall, who initially resided in Georgetown and now lives on the East Coast of Demerara, told Guyana Chronicle that should GECOM fail to update her address she would, undoubtedly, be disenfranchised.

“If they don’t change my address, I would not be able to vote. I wouldn’t be able to vote, and it is not fair at all because I re-registered during a legitimate process,” Marshall told this newspaper. Iterating that it is her democratic right to vote, the 29-year-old said GECOM should, in accordance with the Laws of Guyana, put all systems in place to ensure that there are free and fair elections come March 2.

Denise LaFleur, 34, who hails from Region Six but now lives in Region Four, said she would be unable to travel to Region Six on Elections Day to vote; hence it is important for GECOM to change her address. Like Marshall, she had changed her address during the registration exercise in 2019. “I cannot travel back to Region Six to vote because of my working schedule. I would like to vote but it would be difficult for me to travel all that distance, so I’m hoping that they could change it before elections,” LaFleur told this newspaper.
Russian-trained Economist, Patricia Anthony, is also among the thousands of Guyanese who had registered in the 2019 House-to-House Registration and effect changes to their address. In the case of Anthony, like many others, her old address remains on the RLE much to her surprise and dissatisfaction.

“Being abroad engaged in studies for quite a few years… I was adamant to make my vote count. Hence I did everything on my part to ensure that I was on the list,” Anthony shared.
The 30-year-old economist explained that during the House-to-House Registration exercise, which ended in August, 2019, she changed her address. Originally from Linden, Region 10, Anthony now works and lives in Georgetown, Region Four.

“Having sorted that out and getting registered, I thought I was on point to getting my finger inked come March 2020. One can only imagine my shock after checking the published list only to find my old information being generated. Had I not checked the list and turned up on Election Day at my district to vote, to be told that I’m not on the list there, would’ve been an ultimate disappointment,” Anthony told this newspaper. Anthony is insistent that GECOM, in accordance with the laws, must update her address.
Based on reports coming out of GECOM, at the time of the extraction of the Preliminary List of Electors (PLE) from the National Register of Registrant Database (NRRDB), data from the House-to-House Registration exercise was not included due to the simple fact that they were sent abroad to be cross-matched for duplicates.

Subsequently, GECOM added the more than 16,000 new registrants, from the House-to-House Registration exercise, to the NRRDB and by extension the Revised List of Electors; however, evidence suggests that the NRRDB was not entirely updated to reflect changes made by some of the ‘old’ registrants, who had reregistered in 2019.

In an effort to ensure that persons like Anthony, Marshall and LaFleur are not disenfranchised, the Commissioner of National Registration, Keith Lowenfield is updating the NRRDB, and, by extension the Revised List of Electors to reflect the data (particularly the new addresses) provided during the 2019-House-to-House Registration exercise, in accordance with Regulations 35 and 37 of the National Registration (Residents) Regulations.

The Revised List of Electors has been posted for public scrutiny and electors are urged to check and verify their information at locations in their respective areas or on the GECOM’s website. “If there has been any advertence on the part of GECOM, electors are advised to immediately visit the GECOM Registration Office to have the information updated accordingly,” GECOM Public Relations Officer, Yolanda Ward urged in a recent statement.
While noting that free, fair and transparent processes in the production of a credible list is the hallmark of credible elections, Ward assured the nation that GECOM will ensure that the name of every registered eligible elector is properly accounted for on the Official List of Electors.