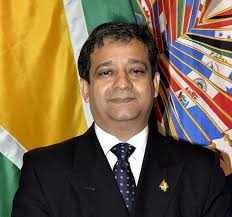 The United States Assistant Secretary of State for Western Hemispheric Affairs, Michael Kozak on Thursday summoned Guyana’s Ambassador, Riyad Insanally to inform Guyana that a government sworn in based on non-credible results would be illegitimate.

“On behalf of the U.S. government, today I summoned #Guyana Ambassador to the U.S. Riyad Insanally to convey our firm position that any government sworn in based on flawed election results would not be legitimate. Every vote must be counted,” Kozak said on Twitter.

Kozak’s disclosure that he met with Insanally came hours after General Secretary of A Partnership for National Unity (APNU), Joseph Harmon signaled that the coalition was willing to settle for a legal recount of votes cast in the March 2, 2020 general and regional elections to avert international sanctions.

The US and Britain have been in the forefront of calling for a true reflection of the election results, after international observers from the Carter Centre, Caribbean Community (CARICOM), the Commonwealth and the European Union scathingly criticised the tabulation of votes for Region Four by the Returning Officer, Clairmont Mingo.

Mingo has since been cited by the People’s Progressive Party for contempt of court because he allegedly failed to abide by a High Court order on how the tabulation process should be conducted by using the Statements of Poll.

Harmon on Thursday said a deal by President David Granger and Opposition Leader, Bharrat Jagdeo to have a national recount of the votes was scuttled when a CARICOM supervisory team asked that their role be gazetted. Soon after, an APNU+AFC candidate, Ulita Moore, filed for a judicial review and obtained an injunction blocking the declaration of the results.