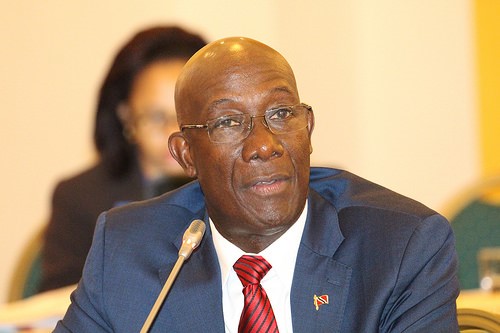 Prime Minister of Trinidad and Tobago, Dr Keith Rowley will be joining four other leaders of the Caribbean Community (CARICOM) for a visit to Guyana following the tension and impasse from the country’s March 2 general and regional elections.

Officials at the CARICOM Secretariat in Georgetown told the News Room that the delegation, led by Chairman of CARICOM, Mia Mottley, will arrive in Guyana sometime today. Other Caribbean leaders include Prime Ministers Roosevelt Skerrit of Dominica, Ralph Gonsalves of St Vincent and the Grenadines and Keith Mitchell of Grenada.

A statement from CARICOM on Tuesday announced that the team’s visit is to “ease tension in the country and assist in arriving at a resolution to the impasse that resulted from last Monday’s general elections.”

They are due to meet for with President David Granger, representatives of the APNU+AFC Coalition, the Opposition PPP, and other parties which contested the elections.

Meetings are also being scheduled with representatives of local and international observer groups and the Ethnic Relations Commission.

The CARICOM Chairman had called for a lawful completion of the elections results following the declaration of unverified votes in Guyana’s largest voting district by the Returning Officer.

“We are very clear, every vote must be made to count; and transparently so.  We have noted that all sides have been making serious allegations against each other.

“It is critical that good sense prevail. The Preservation of law and order is paramount and all parties must work hard to ensure that there is peace on the roads and in the communities across Guyana. There has already been 1 death reported overnight. That is 1 death too many,” the CARICOM Chairman had noted.