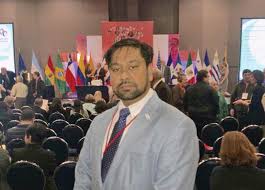 Dear Editor,
I have heard and seen enough to conclude that GECOM, the PNC, and team Granger are using the State apparatus to attempt to bully this nation into accepting results that are furthest from the truth. But before I continue, let me state what the elections were not about. It is not a conflict between our different ethnic groups. While some may want to push that narrative, it is an arithmetical impossibility for any party to win these elections on the support of any one ethnic group (Indo-Guyanese – 39 per cent, Afro-Guyanese 29 per cent, Amerindians – 11 per cent and Mixed – 21 per cent).

These elections are not a conflict between individuals because when the dust settles, PNC supporters (the APNU is the PNC) and PPP supporters have to continue to work together to build this nation. These elections are not about whether this nation should take a path of democracy or dictatorship because clearly, the people in their hundreds of thousands came out on E-Day to voice their support for democracy and registered their commitment to the philosophy of one man: one vote.

I know of no one, save an except a small cabal in GECOM (and an even smaller cabal at the top of the PNC with tacit support from another cabal at the top of the police), who wants to take away the right of the people to vote and who wants to achieve power by fraud. It would be grossly damaging to the intelligence of the overwhelming majority of the people of this nation, to suggest otherwise.

What these elections have taught me is that both the PPP and PNC have a strong base but that base, especially the youthful portion, has a greater loyalty to Guyana and its human development rather than to their respective party. What these elections taught me is that any political party can be beaten in Guyana, especially if the Government fails on the policy front. Mr Granger failed convincingly on the policy front between May 2015 and March 2020 and that is why he lost these elections. In particular, he failed the youths on the jobs front and discriminated against people who were perceived not to be his “kith and kin”. The people in return dealt him a political blow that he did not expect, thus his dogmatic adverse reaction to the truth.

What these elections have taught me is that in 2025, the youths will have many choices and I think this is what is scaring the living daylight out of the PNC gang of geriatrics who have now outlived their usefulness in a democracy arena, hence their commitment to the idea of dictatorship and rigged elections. These “old-timers” realised that that the 68 per cent (youths under 40 years of age), do not identify with them. That spells bad news for the PNC.

But the solution is not rigged elections. The solution is one man: one vote and an attitudinal metamorphosis that can cause a re-engineering of the thinking in that party and its leaders to a life of hard work and service to all, not only your “kith and kin”. The solution is the crafting of public policies to ensure that every man feels part of project Guyana. That is why when given the chance to rule, each leader must do their best for their comrades, irrespective if that comrade sleeps on the public pavement in front of the Bourda Post Office or lives in the biggest mansion.

We must never go back to 1974 and the Sophia declaration as exalted by the PNC. A small cabal of people must never be allowed to feel that irrespective of their poor performance, this nation owes them and they can subscribe to bankrupt ideologies like “the State is but an arm of the party” as advanced by the then PNC strongman, Mr Burnham.
This nation owes Mr Granger nothing!

The truth of the matter is, everything he owns is as a result of what Guyana provided to him. Therefore, he owes a debt of gratitude to this nation. But what we have been seeing from him for a while now is an attitude of mind of deep ingratitude and ungratefulness. History has shown that ungrateful leaders are a danger to a nation. Is this the situation we are having here today?

A grateful leader will allow the nation access to copies of the SoPs from District No Four that were provided to the Chief Elections Officer (CEO) by the respective Presiding Officers. For all purposes, these SoPs are public documents to which the citizens of Guyana are entitled to access. All that these SoPs represent is a carbon copy of the public document that was pasted on the doors of each Polling Station on the night of the elections. These SoPs contain facts about each Polling Station, especially those from District No Four, that when aggregated, will determine who won these 2020 elections.

At the end of the day, the losers have to go back to the drawing board and start planning for 2025. But what is unacceptable is a continuation of this infantile and petty anti-developmental attitude of mind of undermining a credible ascertainment and tabulation of the results of Region No Four as is being perpetrated by the folks in the PNC and their “flunkies” at the top of GECOM. That sort of attitude is reserved for a spoilt brat on the cricket field who when bowled at the middle stump, grabs the ball and the bat and runs home shouting, if I cannot bat, no one else shall bat.