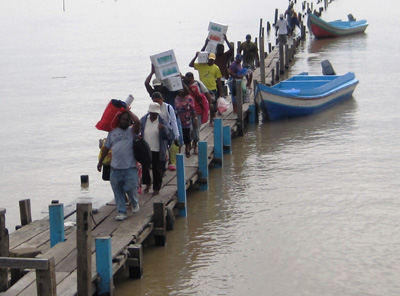 ‘Backtrack’ travel between Suriname and Guyana, which had been closed for a week, resumed operations on Saturday.

Faaiz Mursaline, CEO of Golden Gloves Speedboat Services, confirmed to  Stabroek News that they had resumed operations on Saturday morning. He noted, that a large number of persons used the service on Saturday after becoming aware that they were back in operation, since hundreds of Guyanese nationals were left stranded in Suriname due to the sudden closure on February 29th following a decision by the Ministry of Public Health which was concerned about the coronavirus threat.

The decision was implemented by the police following a request for a seven-day closure by the Ministry which was concerned that travel through the routes could increase while police were deployed for the general and regional elections and would therefore be unable to enforce protocols surrounding the coronavirus.

Mursaline, who operates the largest `backtrack’ boat service at Springlands, Corentyne, had indicated that the closure was based “on some orders from the top”.  He had also noted, that he had 35 workers who would have been affected by the sudden closure.

According to a February 18th, 2020 letter, which was seen by this newspaper, the Ministry of Public Health wrote to the Minister of Public Security, Khemraj Ramjattan, requesting that the Guyana to Suriname `backtrack’ entry be closed during the period of February 29 to March 7 due to the increase in number of cases in the coronavirus in Germany and France. “The Ministry of (Public) Health believes that since our security will be dispatched for the General and Regional Elections, travel activity at this soft entry point can increase significantly, thus posing a threat to the citizens of Guyana,” the letter stated.

No public announcement was made of the decision.

Many utilise the route as an alternative to the Canawaima ferry service, which is operated daily between Moleson Creek, Guyana and South Drain, Suriname. Since many travellers do not use travel documents to cross, a source had explained, there are a significant number of persons who travelled to Suriname through the route for work in Nickerie and were unable to return until the reopening of the `backtrack’ route.