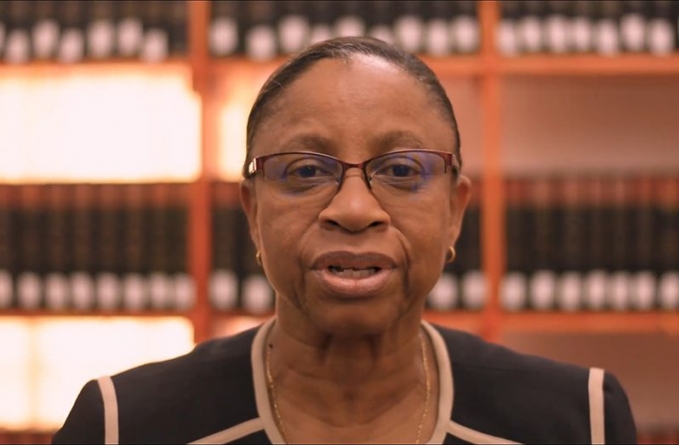 THE Supreme Court of Judicature, on Wednesday, launched a Public Education and Engagement Programme aimed at building public trust and confidence in the Judiciary and the judicial system during the Coronavirus (COVID-19) pandemic. The programme launched virtually on the Supreme Court Facebook platform is supported by the Canadian Government and the Judicial Reform and Institutional Strengthening (JURIST) Project. The launch was addressed by Chancellor of the Judiciary (ag), Justice Yonette Cummings-Edwards OR, CCH; Chief Justice (ag), Madam Justice Roxane George CCH, SC; Canadian High Commissioner to Guyana, Lilian Chatterjee; Director of the JURIST Project, Gloria Richards-Johnson; and Registrar of the Supreme Court, Sueanna Lovell.

According to the acting Chief Justice, before the pandemic hit, members of the Judiciary, along with members of the Bar Association and the JURIST project coordinator and communications specialist, were working together in a public education and engagement working group. At the time, the group, along with a consulting firm hired by JURIST, was in the process of developing a public education campaign designed to build public trust and confidence in the Judiciary and the judicial system. “The pandemic reordered our communication strategy. It was fortuitous that we were already engaged because the working group was able to commence a campaign entitled ‘We Can Still Hear You’,” the CJ said. The CJ explained that this campaign aided the court in assuring citizens that, despite the pandemic, the judicial system continued to function and that there was access to justice as their matters could still be heard.

The ‘We Can Still Hear You’ campaign featured judicial officers such as judges and magistrates delivering messages on social media and radio which opened up a new dimension between the court and the public. The CJ in her remarks highlighted the domestic violence application, as being in the category of urgent cases which require special attention due to the risk to family members, especially women and children She also highlighted the recommencement of jury trials as the court seeks to ensure that accused, especially those in custody, have their trials conducted in a reasonable time as mandated by the Constitution of Guyana. She also spoke about the recent launch of the Court website (https://supremecourt.gy) which provides general information and an online filing mechanism. “The pivot to the COVID-19 communications campaign was an imperative but the communications project to build public trust and confidence in the Judiciary remains a very important focus of our partnership with JURIST as we return to implementing our core communication strategy we will build on the ‘We Can Still Hear You’ campaign to educate the public about our Judiciary and our judicial system,” the CJ stressed.

Meanwhile, the Canadian High Commissioner to Guyana explained the need for the public to understand the value of the judicial system and its works. “If the public does not understand the value of the judicial branch they would not be willing to support it through their taxes and other funding or serve their role on juries or trust the decisions that come from the system,” the High Commissioner said. “A strong judiciary is one that listens to those they serve,” the High Commissioner said as she commended the Guyanese Judiciary for launching the programme which seeks to ensure the “wheels of justice are still turning” despite the pandemic. “Whenever anything changes, the ability of the courts to hear any matters that concern our citizens, their families, their property, their business or their relationships or even the State, the courts must find a way to respond quickly, safely and efficiently,” the Chancellor of the Judiciary said.