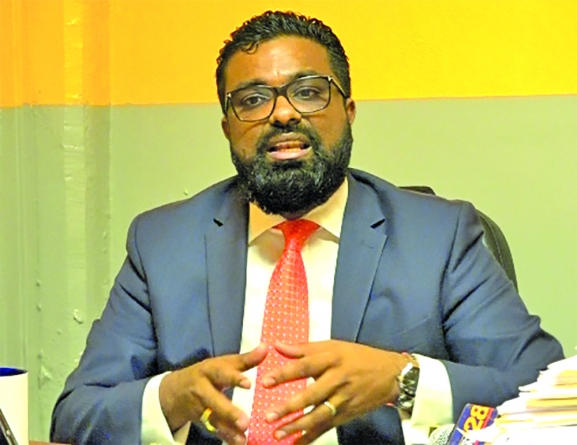 From 2015 to 2020, the Guyana Elections Commission (GECOM) has received billions of dollars in funds from the State. But despite the fact that it is a constitutional agency with a duty to the people, one Commissioner has revealed that a shroud of secrecy hangs over GECOM and its spending during the 2015 and 2020 elections.

When asked about the finances of the agency in an exclusive interview with this publication, GECOM Commissioner Sase Gunraj made the shocking revelation that Chief Elections Officer Keith Lowenfield, and the Secretariat that he heads, have so far failed to present reports for the 2015 and 2020 General and Regional Elections.
“I have no clue what it cost for the electoral process. We don’t get reports on that. For the 2015 elections, there has been no report from the CEO to the Commission. None. The 2020 election, a declaration was made 101 days ago. And there has been no report from the Secretariat to the Commission in relation to that election either,” he revealed.

“We have not received reports to say, look, from jump street, this is what occurred. And here, this is where we are. We spent so much money along the way. We had these difficulties. I believe that from any event of such a national nature, there ought to be some sort of report,” Gunraj said, adding that submissions of reports are also a statutory requirement.
Notwithstanding the fact that the reports are required by statute, Gunraj noted that the submission of these reports giving account for how billions were spent should be a standard practice anyway.
“Proper management techniques would dictate that you have to provide what were the outcomes, what you hope to do differently. I don’t believe that the law has to dictate that, although as far as I can recall it’s mandated by statute. Whether one will be forthcoming will be anybody’s guess.”

There are reports delving into the financial management of the 2015 elections. But they did not come from the Secretariat. Instead, those reports are special ones conducted by the Audit Office of Guyana, which unearthed a nest of controversies, including procurement breaches and inflated prices.
One of the reports probed the purchase of 50 Very High Frequency (VHF) radio sets, valued at almost $100 million. The purchases, which had occurred prior to the 2015 elections, raised concerns over the extraordinarily high cost of the equipment. The investigation’s scope had included contracts and inventories, in addition to spending for the May 2015 General and Regional Elections.

Besides the radios, the State’s auditors also looked into the purchase of a quantity of toners, pliers and batteries. Based on reports, the radio sets were purchased for use during the elections, particularly in the outlying regions of Guyana; however, they were never put to use after it was discovered that many of them were not working.

Later, information surfaced that even though the electoral body collected quotations from a number of suppliers, it handed the contract for the supply of the equipment to another businessman. In fact, one of the international manufacturers of the products submitted tenders for the radio sets but had its order cancelled.
Media reports later surfaced that some of the equipment purchased was obsolete and not covered by warranty. Following the Auditor General’s findings, recommendations were made to bring in the police.
But according to Gunraj, these and other matters were consistently pushed on the back burner by GECOM prior to the December 2018 No-Confidence Motion. And after that, GECOM’s focus was fixed on delivering the 2020 General and Regional Elections.

“The system itself did not allow those things to be dealt with,” he said. “And of course, there were aspects that were deliberately (impeded)… we couldn’t even get to discuss the Auditor General report. Because in any proper functioning organisation, when allegations of such a dastardly nature are made and proven, people get sent home.”