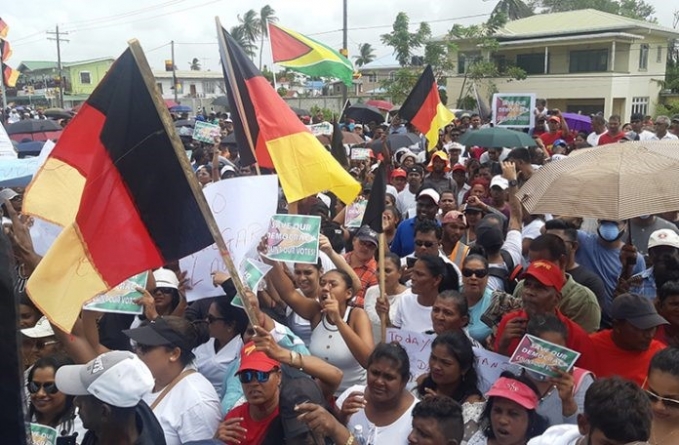 Police on Friday, March 6, 2020, were left with no other alternative but to fire tear gas and rubber bullets into a mob of supporters of People Progressive Party/ Civic (PPP/C), who had blocked off the Lusignan Public Road, East Coast Demerara, by placing utility poles and burning tyres on the main road in protest.

The mob was protesting against the results declared by the Guyana Elections Commission (GECOM) and demanded a recount of the Region Four results.

The protestors claimed that the 2020 elections were “rigged” and blocked off both sections of the public road.
In a sea of yellow, red and black, the PPP protestors were well armed with placards and their party flag and they marched down the Lusignan Road to the Mon Repos Market, E.C.D.

From young to old were out in their numbers chanting words such as “we need a recount”, “my vote must count”, “when we stand, we stand for Guyana”, and “we are not standing for dictatorship.”

The elderly women sat on the utility poles, which was spread across the road and refused to move when ordered by the police.

“In my estimation, this is not a hostile crowd, the only thing that this crowd has so far done is that they blocked the road,” said Sheila Veersammy, a candidate for the PPP/C.
She stressed she had warned the supporters about the blockage of the road, but instead they told her that it was the only way that their cries would have been recognised.

PPP member, Anil Nandlall, also spoke with the protestors and attempted to control the crowd.

“I’m attempting to keep them calm and to keep them mobilised, it doesn’t appear that I will be able to get them off the road or send them home but I know the situation can develop,” Nandlall told the media.

As Nandlall spoke, the crowd listened to him attentively. He said, “You have the assurance from the PPP party that we will continue to do everything that is possible to protect the integrity of your votes and the electoral process and to secure your democracy.”
He urged the protesters to remain peaceful and calm and requested that they remove from the roadway.

“This is na a PPP protest! This is a people protest” the mob hurled at Nandlall.
“We shall win in the end and Irfaan Ali will be sworn in as president in the end” Nandlall declared as he explained that the party had already made an application for the region four votes be recounted.

Priya D. Manickchand, a candidate for the PPP/C spoke to the crowd at Mon Repos and told them to remain calm.

There was a high police presence as the ranks were on alert. The ranks were also verbally assaulted by some of the supporters, but this was not condoned by the senior officer on the scene.

However, as the protest went on, persons began setting more tyres on fire which caused the police riot squad to assemble. The fire tender was summoned and managed to extinguish the fire.

At that point, the police were ordering the protesters to return to their homes, however, this led to a confrontation after a man attacked a rank.

The ranks then fired tear gas and fired rubber bullets into the crowd. The crowd retreated and the police managed to control the situation. A male supporter who had brandished a firearm was also arrested. Several males were arrested for attacking and throwing glass bottles at the police.