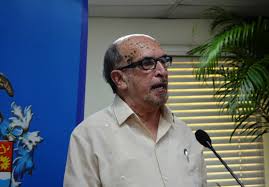 Former Minister of Foreign Affairs Rudy Insanally has written President David Granger urging him to remain faithful to his promise for a recount of votes from the March 2nd general elections and warning of the seriousness of repercussions were the international community to place sanctions on Guyana.

In a copy of the letter released to the press, Insanally said that as  a retired diplomat and technocrat Minister for Foreign Affairs who has served every government and President since Guyana’s independence,  he believes he has earned the right to express to Granger his concerns over the present situation.

“Not unnaturally, one of my greatest fears is that, having worked for a lifetime to build close and cooperative relations between Guyana and the international community, the resounding furore which followed the recent election and projected us abroad as a racist and undemocratic polity, will most likely reduce our current prestigious world standing to pariah status and public scorn.  Not only our domestic policies but also our international initiatives will be seen as mere charade.