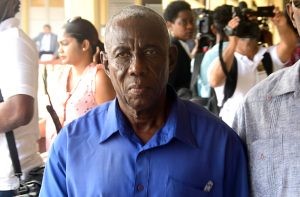 The Returning Officer (RO) for Region Four Clairmont Mingo has declared results for his voting district after a process roundly rejected by other contesting parties and observers except the incumbent APNU+AFC coalition, which stands to be declared the winner of the March 2 polls should they be certified.

Mingo made his declaration just after 11 last night following a day which saw international observers withdraw from the process and the RO appearing before Chief Justice Roxane George-Wiltshire in a contempt hearing.

Despite this and various other interruptions and accusations Mingo declar-ed that the APNU+AFC had won the Region with 136,057 votes, compared to 77,231 for the People’s Progressive Party/Civic (PPP/C), a margin of 58,826. This margin is large enough to close the nearly 52,000 vote gap the PPP/C had recorded after the completed count of the other nine regions.