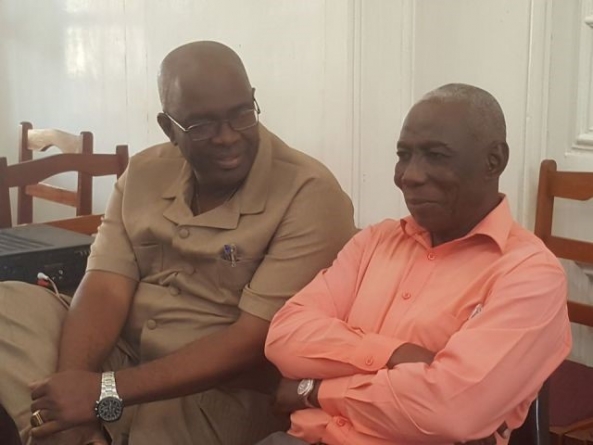 Chief Justice (ag) Roxane George had ruled that the Declaration of Results for Electoral District Four (Demerara-Mahaica) is null and void and that the process of tabulating the Statements of Poll (SOPs) is to recommence no later than 11:00h today.

However, INews understands that even after 11:15hrs, the process was yet to start.
This was confirmed by several persons including Presidential Candidate of the Liberty and Justice Party, Lenox Shuman.

This comes on the heels of GECOM initially barring Political Parties and Observers from entering RO Clairmont Mingo’s Office at the corner of High and Hadfield Streets, Georgetown.

A decision was then taken to allow one Observer from each Mission as well as one Political Party representative to enter for a meeting.

It is unclear, at this time, whether Mingo would restart the process of tabulating the SOPs or pick up from where he left off.

Meanwhile, Opposition GECOM Commissioner Sase Gunraj, in a brief social media post, announced that Mingo is attempting to use spreadsheets to conduct the verification process.

There is a consensus among majority of the political parties (all except the APNU/AFC coalition) for the SOPs to be used instead during the verification process.