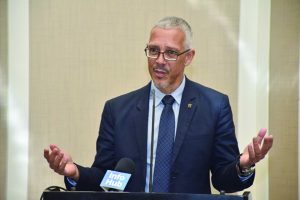 Former Business Minister and Director of Business, Dominic Gaskin, has publicly stated that he does not “buy” the numbers used by District Four Returning Officer, Clairmont Mingo, in his recent declaration and called for a full investigation into the wrongdoings at the Guyana Elections Commission (GECOM).

In a statement posted on his Facebook page last evening, Gaskin expressed his displeasure that it has been 18 days since Guyana went to the March 2, 2020 polls to cast their ballots and no declaration has been made.
This, he said, was a “relatively simple exercise” for Guyanese to “elect a government of their choice.”
According to him, the declaration made by Mingo on Thursday, 5th March for District Four, the largest district, was immediately rejected based on the procedural grounds and the fact that it lacked transparency.

To this, Gaskin said, “I too have taken a position (personal) on the Mingo Declaration – I don’t buy his numbers. Who vex, vex! I am not attempting to convince anyone that my position is the right one. I’ve gone beyond that.”
The Former Business Minister stressed that the post-elections conduct “has not been exemplary”, with little concern for the youths who are closely paying attention.

Gaskin highlighted too that there has been a lost in confidence of GECOM. He said, “regardless of who is wrong or right or good or bad, GECOM cannot purport to hold credible elections in the future unless it can satisfactorily address the major concerns that have been raised about its declared results and the post-election processes leading to those declarations.”

Further, he opined that the APNU+AFC will be unable to win another election in the near future stating that “whether through public perception or bias, this is a very likely consequence of what has taken place and doesn’t bode well for our future.”

Gaskin also made mention of the damage to society caused by heighten “ethnic tensions.”
According to him, “all that has been said, implied and displayed since 2nd March has severely damaged the fragile but admirable co-existence of our two major ethnic groups.”

He went on to suggest that Guyana needs a new “model of governance”, one which does not “incite this level of divisiveness every five years.”
“The real big men and women have to start talking to each other, or stop pretending to be leaders. Various other stakeholders need to set aside their emotions and adopt a more conciliatory posture which puts the nation first,” he said.

In conclusion, Gaskin stated that all voters deserve to know the true result of the process in which they “innocently and dutifully participated.”
A full-fledged investigation into GECOM, he added, is needed to ascertain whether there was any wrongdoing on the part of individuals within the elections body as it relates to the integrity of statements of poll or the tabulation of results thereof.