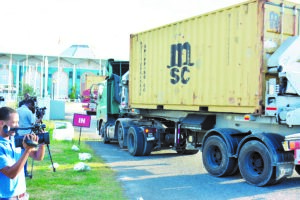 While there were hopes that the recount of ballots cast on March 2 at the National and Regional Elections would have started on Monday, this projection was quashed after it was suspended, resulting in another delay.

On Monday evening, officials from the various election observer missions and party agents converged at the Arthur Chung Conference Centre (ACCC), Liliendaal, Greater Georgetown, to commence the counting of the Region Four ballot boxes which arrived under heavy Police escort.
Stakeholders stood outside, waiting for hours as the Guyana Elections Commission (GECOM) made the logistic arrangements to commence the process but this never got underway.

After waiting for some time, Commissioner of the Guyana Elections Commission, Robeson Benn informed the media that there would be no recount. He said throughout the day, it was posited by GECOM Chair, Justice Claudette Singh that the process would commence soon. However, these phoney assurances ended after it was communicated to him by Deputy Chief Elections Officer Roxanne Myers during an exchange, that no official announcement was directed to these stakeholders.

“I waited since 10:00h or so for advice on when a recount would take place. I was told by the Chair sometime around 02:00h that there would likely be a start of a recount around 04:00h…I came here a bit after 04:00h. People were standing in the yard. I went into the building and nothing much was happening,” Benn recalled.

He added, “When I was sitting there about 06:30h or later, Ms Myers came into the building and asked me whether I was on container duty…I said to her ‘I don’t understand what you’re telling me’ and then she said ‘Well the building will be closed for tonight and there will be no recount for the night’. That’s the first time I heard of it.”

Soon after the ballot boxes were secured, all lights at the Centre were shut down, as the political parties assigned their agents to stand guard throughout the night. Only one agent per party was permitted to overlook the secured containers.
Meanwhile, former Attorney General, Anil Nandlall stated that aide-memoire was yet to be approved by the President. The document speaks to the undertaking of Caricom in the process and the role of other stakeholders. However, President David Granger reportedly said he needed legal advice on the one-page document.

“That document was sent since last night and the Leader of the Opposition essentially approved it and it was sent to the President. The President is apparently claiming that he needs legal advice. It’s a one-page document and it essentially capture what the Caricom statement says. So, I don’t know what is there to get legal advice on,” the former AG questioned.
Nandlall reminded that the document can be signed after the recount starts, amid claims from the GECOM Chair that she is awaiting its completion. According to him, this is not valid as a delaying tactic.

“Utterly shameful”
After waiting for several hours, local observer from the Private Sector Commission, Kit Nascimento stormed out of the Centre in disappointment, having exerted time without any results.
He lamented that it is “utterly shameful” on Guyana to have international stakeholders witness this type of debacle.

“Not a word has come out to us as to what is taking place…This is an absolute disgrace. It’s a disgrace to Guyana. It’s a disgrace to our country. It is utterly shameful and I believe the Chairman and officials of GECOM should be thoroughly ashamed of themselves. We have no idea if a recount is going to start. We have no idea when,” he said.
Nascimento viewed this shrewd act as an attempt to ensure that the observers leave the Centre so that the recount is shrouded in secrecy.

“Clearly, this is an attempt to make us lose our patience and leave and do it in secret,” he further positioned.