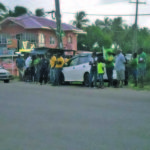 Leader of the Alliance for Change (AFC) and Prime Ministerial candidate for the coalition APNU/AFC, Khemraj Ramjattan, failed to attend at a meeting in his home village Number 47 Corentyne, Berbice.

Ramjattan was scheduled to speak at a meeting on Friday afternoon. At the meeting, about 15 persons and about five party representatives attended. Ramjattan and his party – AFC— has become very unpopular in the village he grew up.

At the November 2018 Local Government Elections, the AFC failed to secure a seat on the Good Hope-Number 51 Neighbourhood Democratic Council (NDC) with the A Partnership for National Unity (APNU) securing five seats and the People’s Progressive Party (PPP) nine. Both the AFC and APNU ran as individual parties in that election.
At those elections, in the 52-72 NDC, which is next to Ramjattan’s home village, AFC failed to gain a seat while APNU secured one and the PPP secured 17 seats.

Meanwhile, on Friday at Number 64 Village, which is in the NDC next to Ramjattan’s home village, former Legal Affairs Minister Anil Nandlall addressed a large number of persons who attended that meeting.