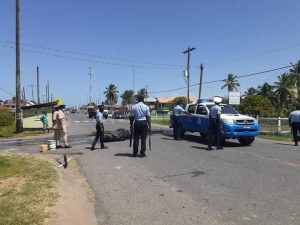 Mingo is currently under arrest at the CID Headquarters in Georgetown over allegations of electoral fraud.
The residents chanted “free Mingo” and burnt tyres across the road.
The protestors told reporters that they went out in solidarity and to show support to Mingo and his family and are calling for his release.

Mingo was arrested at his home in Abary, Region Five, earlier in the week and was taken to the CID Headquarters, Georgetown for questioning.
Other staff members who worked with him at GECOM have also been arrested.