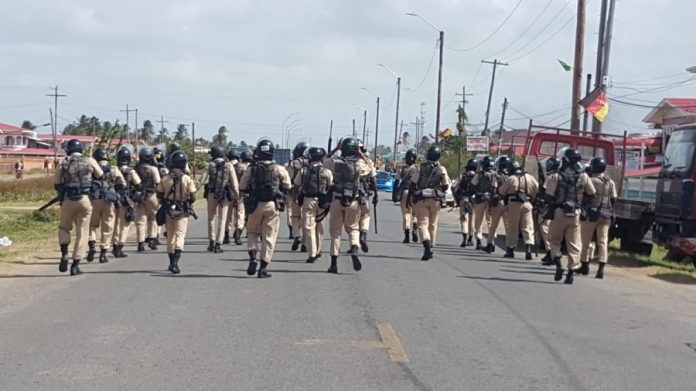 Heightened protest action by supporters of the People’s Progressive Party/Civic (PPP/C) along the West Coast Berbice public road has resulted in several injuries to school children and police officers coming under attack.

Reports are that three children, ages  13,14 and 15 who attend school at Belladrum village, were heading home in a ‘David G’ bus when the vehicle came under attack by PPP/C protesters at Bush Lot village.

The children were taken to the hospital for treatment. Further up the corridor, at Bath, several police officers came under attack from the protesters. A female cop was injured by the mobs who blocked the roadway.

Our reporters on the ground reported that teams of riot police have arrived in the area to quell the situation.

Down at Mon Repos and Lusignan, protesters have also blocked parts of the roadway. In a video circulating on social media, a man can be seen brandishing a weapon as a motorist recorded him.

The protests have erupted as the country awaits the Guyana Elections Commission(GECOM) to announce the results of Monday’s regional and general elections. Data released by the commission on Thursday shows the APNU+AFC leading the PPP/C in total votes recorded across the country.

Reports are members of the ABC countries have engaged GECOM in a meeting sometime after lunchtime today.