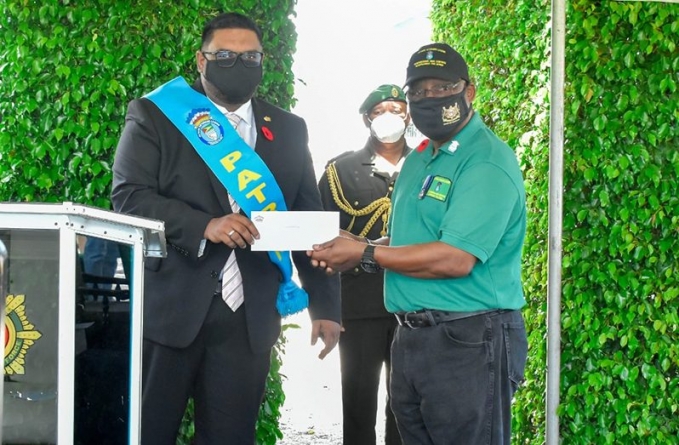 PRESIDENT Irfaan Ali, on Friday, promised the military that the Government of Guyana would work fervently to upgrade their living standards with a proposed new housing programme which should commence next year.
The Head of State also presented a cheque of $1.5M to the Guyana Veterans Legion (GVL), of which he was made Patron, the Office of the President noted in a press release.
President Ali was at the time attending a wreath-laying ceremony at the Veteran’s Monument, on the front lawn of the Guyana Defence Force (GDF) Base Camp Ayanganna.

According to the release, the President stated that it was imperative for veterans and serving members of the military to be adequately rewarded for their contributions to the defence and development of the country.
“We’re working now to ensure that the housing needs of our men and women in uniform are realised while they are still at a young age ….We’re developing a special programme to assist them in this and I’m sure that very early next year they will start to benefit from the results of this programme,” the President was quoted as saying.

UTILISING SKILLS
The Commander-in-Chief said that he was happy to see that there were already several officers of the GDF, including Brigadier Gary Beaton, who are serving on state boards. He added that his government acknowledges the diverse talents in the GDF and will utilise their skills in national development.

“We have to build a new culture in our country of respect and adoration for our men and women in uniform. You see it when you travel and I think that would come about with a strong bond we’re trying to create between the army and the communities”.

Also present at the event were Prime Minister, Brigadier (ret’d) Mark Phillips; Chief-of-Staff of the GDF, Brigadier Godfrey Bess and National Security Advisor, Captain Gerry Gouveia.
According to the release, Brigadier Bess said that he welcomed the government’s support of the GDF and noted that the President had already made several commitments that will improve the personal and professional development of the ranks.

“The Guyana Defence Force will continue to provide opportunities for personal and professional development. Our Commander-in-Chief…has approved scores of scholarships for our troops to attend overseas and local academic institutions… He also has committed to looking at the allowances paid to our ranks with a view to increasing them; these opportunities will provide the foundations for our soldiers that allow them to remain productive citizens after they retire from military service” the GDF head pointed out.

Bess also made a monetary contribution to the GVL as he paid tribute to the veterans. The funds were garnered from donations from each serving member of the GDF.
“On this day, we look back with pride and grateful hearts. We are proud because you chose to endure the hardship and to build what we are enjoying today. We are grateful because you sacrificed so much,” the Chief-of-Staff stated.
Monetary donations were also made to the GVL by Prime Minister, Brigadier (ret’d) Mark Phillips, who pledged $500,000 and Mr. Maurice Gajadhar, A.A who also pledged $500,000.