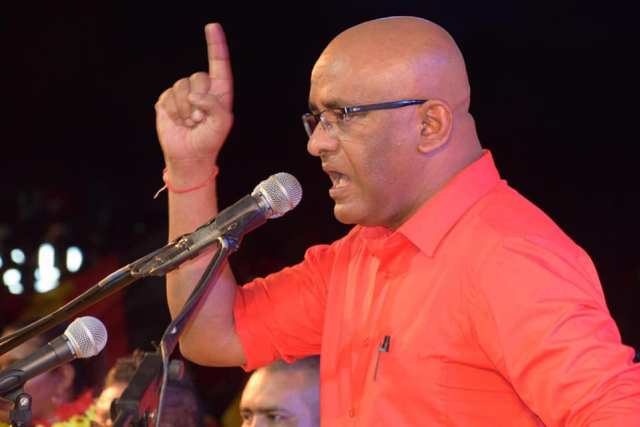 Opposition Leader, Dr. Bharrat Jagdeo, yesterday sent a strong message to President David Granger-led A Partnership For National Unity + Alliance For Change (APNU+AFC) Coalition that he will fiercely resist any attempt hatched to hold on to power after a declaration is made.

“If Granger and his band of riggers,” Jagdeo said in the statement “believe that they can continue to hang on to office after the declaration has been made, then they are living in a fool’s world.”
Jagdeo made reference to the statement issued by the Coalition yesterday and called it a “clear defiance” of the international community, the Chief Justice (ag), Roxane George Wiltshire; the Caribbean Court of Justice (CCJ) and the Guyana Elections Commission (GECOM). They have all been clear that any declaration has to be made on the basis of the figures from the national recount.

APNU+AFC, in its statement, affirmed President David Granger’s position that he will not be accepting a result made by GECOM using the numbers from the recount that confirm a victory for the People’s Progressive Party/Civic (PPP/C) at the March 2, 2020 Elections.

The party said “We maintain that the Elections Commission can only make a ‘declaration’ based on valid votes. The recount process which was conducted, painstakingly, for 33 days revealed massive irregularities and extensive fraud which cannot be foisted on the Guyanese people to contrive an outcome that betrays the will of the electorate.”

The position expressed by the Coalition, however, contrasts with previous pronouncements by Granger who had made it clear that he would accept any declaration made by GECOM and also abide by the Constitution, the rulings of the Court, CARICOM and the Commission.

Jagdeo went on to say “If the international community was prepared to condemn and levy sanctions against people who are trying to undermine democracy, even before the declaration, just imagine the consequences the riggers will face if they refuse to leave office after the declaration – essentially staging a coup d’état.”

“Needless to say,” he added, “such a move will be met by fierce resistance by the PPP and other forces fighting for democracy.”
Unsavory actions of the APNU+AFC during the electoral process have already started to attract sanctions from the United States, United Kingdom and Canada. The sanctions which have targeted Coalition members and financiers may eventually include others if a declaration, from the recount numbers, is not made.

“What we have to do now,” the Opposition Leader noted, “is to work to ensure that we have a declaration that is reflective of the will of the people and only one that is derived from the figures generated by the national recount can produce such an outcome.”

The results of the recount, supervised by the high-level CARICOM Scrutineering Team revealed that the PPP won the March 2 Elections with a more than 15,000 valid votes lead ahead of the APNU+AFC.
Instead of accepting the recount figures, the Coalition continues to argue that the recount merely uncovered mass fraud and irregularities and stated that any result from the process would be tainted and unlawful. These allegations were raised by the party but no evidence was produced to support these claims.

In fact, the Coalition’s argument in this regard was nullified by the CCJ which established that the recount was lawful. The court made it clear that “Unless and until an election court decides otherwise, the votes already counted by the recount process as valid votes are incapable of being declared invalid by any person or authority other than the High Court through an election petition.”

That CCJ ruling was also strengthened and reiterated by the Acting Chief Justice in the Mesinga Jones litigation. However, the Coalition is attempting to appeal that ruling in the Appellate Court. Arguments in that matter will be heard tomorrow.

Notwithstanding that, Jagdeo urged that Guyanese should “not be too concerned” about whether the Coalition will accept the declaration or not as he said “we will cross that bridge when we get there.”
“The consequences for Granger and the APNU+AFC at that time will be as alluded to by Secretary General of the OAS, Luis Almagro: Democracy or Abyss?” the Opposition Leader added.