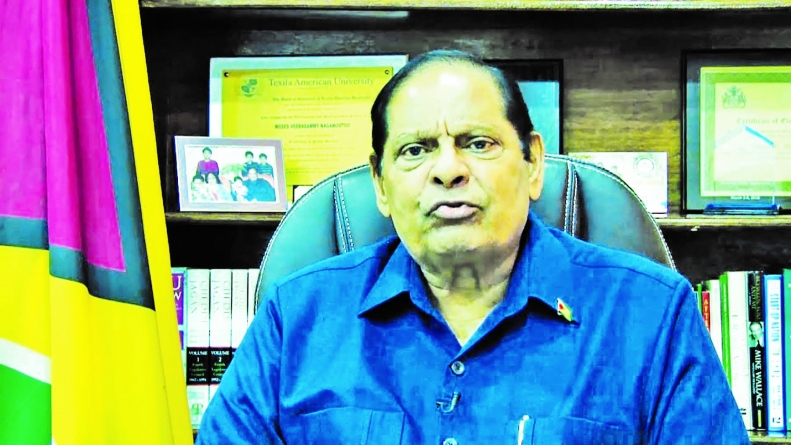 The People’s Progressive Party (PPP) has signalled an intention to file a formal complaint with the Ethnic Relations Commission (ERC) against former Prime Minister Moses Nagamootoo over the provocative language used in a public statement issued on Tuesday by him.

As such, Executive Secretary for the PPP, Zulfikar Mustapha, has since intoned that the international community should view Nagamootoo’s statement as intended to “incite racial strife and animosity among our people”.
Mustapha has since posited that the complaint against Nagamootoo would be “for inciting racial division by spreading inflammatory rumours”.

He was adamant that “blame for any incident, following such a reckless statement, will be laid squarely at the door of Nagamootoo and his cronies in the APNU/AFC coalition”.
Mustapha in a subsequent missive to the media yesterday said Nagamootoo’s talk about an “insurrectionary and bloody plan to shut down the country does nothing for our country or our people at this time, except to incite”.

According to Mustapha, “his (Nagamootoo) statement must be roundly condemned by all”.
It was noted that “Nagamootoo’s hypocrisy in claiming concern for Guyana and the Guyanese people is exposed when he pontificates about plans to destabilise the country without any solid evidence, even as his own actions risk doing exactly that”.
Nagamootoo, in his statement to the media earlier in the day, alleged that a plan had been hatched by the PPP through a front group with plans aimed at isolating and starving the people of Georgetown—the Capital City—which comprises the single largest section of Guyana’s mainly Afro-Guyanese population.

He charges that it is clear that the seditious exercise is to destabilise the country and to promote an armed and racist insurrection in Guyana.
The PPP is contending, however, that anyone with information on any illegalities, or plans to commit an illegality, should take that information to law enforcement authorities.

Mustapha said it would seem that the AFC members have to ‘work for their keep’, given that the comments, ranging from ridiculous to dangerous, seem to be the domain of the junior partner in the coalition.