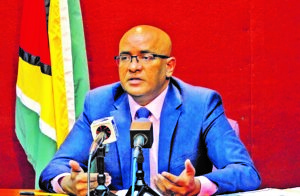 Opposition Leader Bharrat Jagdeo believes that the People’s Progressive Party/Civic (PPP/C) is in possession of conclusive evidence that the incumbent coalition along with elements in the Guyana Elections Commission colluded to hijack and rig the 2020 General and Regional Elections.

Region Four’s Returning Officer, Clairmont Mingo, on Friday initially opted to restart the verification process using StatementS of Poll but things took a turn for the worse from the get-go.
According to officials observing the activity, the very first SoP presented for verification by Mingo showed inflated numbers for

A Partnership for National Unity, Alliance for Change (APNU/AFC).
Jagdeo, in a subsequent press engagement at Freedom House, Robb Street, Georgetown, provided the results for four Polling Stations on the East Bank of Demerara, which he insisted illustrates that the figures being called out by GECOM staff “from purported Statements of Polls (SoPs)” were fictitious.

More votes than electors
Qualifying his position, Jagdeo noted that at the four locations, there were a total of 1136 registered electors. The copies of the original Statements of Poll gave one set of figures for each party, according to Jagdeo.
He noted that when this was contrasted with the new figures being called by GECOM yesterday, there was an increase of 200 votes for APNU/AFC. He noted too that even more glaring is the fact that the new SoP being used by GECOM gave the total number of votes cast at 1150, more votes than the number of persons even registered to vote at those locations.

The Opposition Leader in positing collusion between the incumbent, GECOM and Police ranks, reminded of Volda Lawrence’s signature on the declaration form—that was later struck out by the High Court—for Region Four.
In fact, Jagdeo lamented that there has been no explanation forthcoming from the Commission and that fraud proceedings have been filed against her and Region Four RO, Mingo.

Criminal charges
Guyana Times understands that while the necessary documentation had been prepared, the interested parties were unable to file the private criminal charges on Friday since the courts were closed. A notice was later circulated, which said the courts were closed early to facilitate a sterilisation exercise in relation to the COVID-19 pandemic.
The Opposition Leader in his media engagement disclosed too that the party has since begun informing the international community of the names of the Secretariat staff, Police and APNU/AFC officials that were “complicit in the plot to hijack the electoral process.”

These names have been provided to the international community, he said.
He used the occasion to debunk a number of aspersions being peddled in the public – one such being the claim that the PPP/C won Region Four.

The Opposition Leader was adamant his party never made the claim of winning Region Four but rather points to the discrepancy in the SoPs and the incredulous lead given to the coalition on the SoP in question.
Jagdeo reminded that the coalition took office in 2015 with less than 5000 votes to qualify his assertion that the figures now being used by Mingo cannot be accurate.

He told reporters that he was not optimistic that the Region Four RO would, in fact, do the right thing in relation to the questionable SoPs and said the PPP/C takes solace in the resort to a total recount of the ballots for Region Four.
Jagdeo said the GECOM Chairperson appears to be sympathetic to a recount.

The PPP/C General Secretary made mention of a recount and called on the GECOM Chairperson to ensure the preservation of ballots in storage since he is of the view that Mingo will go ahead and make a declaration despite staunch and credible objections from all and sundry.