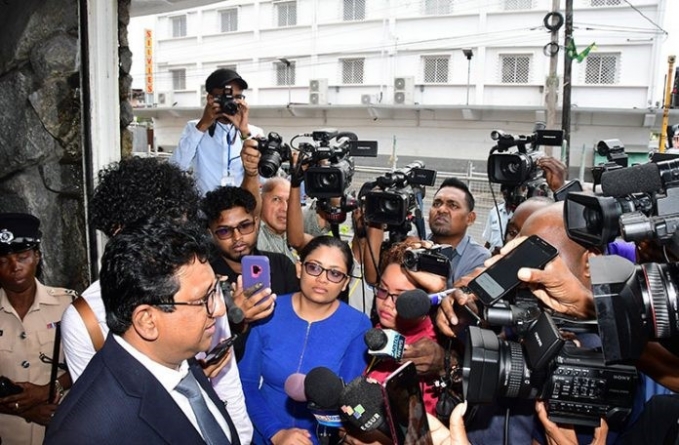 THE People’s Progressive Party/Civic (PPP/C) has secured three injunctions in the High Court to block the release and declaration of the results for the March 2, 2020 General and Regional Elections.

Those injunctions were filed by the PPP/C’s Region Four (Demerara-Mahaica) Agent, Anil Nandlall, following what was claimed as the declaration of results for Region Four by the region’s Returning Officer (RO), Clairmont Mingo, on Thursday.

“Three injunctions were obtained. The first one restrains the Returning Officer from making any disclosure of the Region Four results unless and until he complies with the statutory procedure set out in section 84 of the Representation of the People’s Act and the procedure is the verification process which was aborted and never completed,” said Nandlall, noting that the PPP/C and other contesting parties have been calling for the verification of Statement of Polls (SOPs) for Region Four since Tuesday.

He said the verification process is a condition precedent to any declaration, but that process was never completed. “How can you have a declaration without declaring what you verified? You never verified anything or completed the verification of anything so an order was granted restraining the declaration until that procedure is complied with,” said Nandlall.
The second injunction, as such, “compels” the Returning Officer to comply with Section 84 of the Representation of the People’s Act and to conduct and complete that verification exercise and then make the declaration as the law requires it to be done.

Additionally, Nandlall said the third injunction is an injunction restraining the Chief Elections Officer (CEO), Keith Lowenfield and GECOM from making any declaration of the results of the March 2, 2020 General and Regional elections “unless and until” the returning officer complies with that statutory code or verification enunciated in aforementioned Act.

The PPP/C has since said the order has been served by a Court Marshall to the Commissioners of GECOM and the RO. APNU+AFC Region Four Agent, Attorney General, Basil Williams, however, believes that the PPP/C’s action is just a “propaganda effect.”
In explaining what he meant, Williams said: “It is a propaganda effect because you know once the election season is afoot and once Nomination Day has past, you cannot stop the elections from going ahead and you cannot bring any matter of the elections until after the declaration of the results, 28 days within the declaration of the results or by an elections petition.”

Chairman of GECOM, Justice (ret’d), Claudette Singh has said that Guyana’s General and Regional Elections were free, fair and a major success, even as she called on Guyanese to demonstrate patience as the Elections Secretariat tabulates the votes for a preliminary or final declaration of the results.

She said that GECOM, despite facing a plethora of challenges in the lead up to Monday, March 2, smoothly executed the General and Regional Elections across the country’s 10 administrative regions. According to her, the elections were well run. “We had a very well-run election, despite all of the naysayers,” the GECOM chair said. The Elections Commission, she said, is appreciative of the extensive work done by the Chief Elections Officer (CEO), Keith Lowenfield and his team at the GECOM Secretariat. “On behalf of the Commission, I have to express my sincere thanks and appreciation to our CEO and his hardworking secretariat. They did a fantastic job,” the GECOM Chair said.