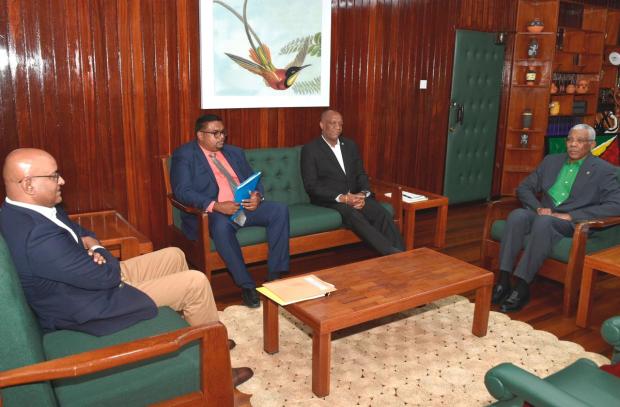 As A Partnership for National Unity+Alliance For Change (APNU+AFC) prepares to head to the Guyana Court of Appeal to challenge a High Court decision that the recounted votes must be used to declare the results of the March 2, 2020 elections, the People’s Progressive Party (PPP) said the coalition was about to waste its time on a “hopeless appeal”.

APNU+AFC campaign manager, Joseph Harmon expressed disappointment at the decision by Chief Justice Roxane George-Wiltshire, saying that she “sidestepped the issue of fraudulent ballots in the tabulated votes at the Recount.”

“We will continue to insist that Fraudulent Recount Votes cannot determine the will of the Guyanese People. Only valid votes can produce such a result,” he said, adding that “we remain steadfast in making our case for valid votes only.”

Former Attorney General and Legal Affairs Minister Anil Nandlall offered said the High Court ruling has vindicated the ruling of Guyana’s apex court, the Caribbean Court of Justice (CCJ), but more importantly, the democracy and the voice of the international community.

The attorney told News Talk Radio 103.1 FM/Demerara Waves Online that it was clear in the judgment that most of the issues that they tried to litigate were already ruled on and paves the way for a declaration based on the results obtained during the CARICOM-certified recount.

“Any appeal will be hopeless, will have no chance of success and is another shameless making dabble for power and to remain in power,” he added.

While welcoming the ruling handed down by the Chief Justice Roxanne George, PPP Presidential Candidate Dr. Irfaan Ali says the government’s move to appeal the case could only be described as “selfish” and “unpatriotic.”

The Chief Justice ruled that the votes from the national recount must stand to declare the results of the March, 2020 general and regional elections, while dismissing the application by a supporter of APNU+AFC.

During a live social media address to his supporters, Ali said that Monday’s ruling has reinforced many of what had already been subject to court action and concreticises the fact that the recount data must be used to declare the election results, which will essentially give his party a clear win.

“We have already seen sanctions being imposed on government functionaries. We know as they continue to delay the declaration which reflects the democratic will of the people, those sanctions will get stronger and the way of life will be affected in Guyana. They need to act selflessly and not selfishness,” he remarked.

The PPP/C presidential candidate also bashed the David Granger-led government and his party for taking an approach towards attacking world leaders, institutions and countries, for standing up for democracy. He described the government’s attacks as “immature and undiplomatic.”

He nevertheless urged his supporters and citizens at large to remain calm and patient, as the time draws closer to the end of a long-awaited declaration.

Lawyers for Ms. Jones said they would file an appeal by Tuesday.

The High Court ruled that the  Chief Elections Officer, Mr. Keith Lowenfield, who has thrice refused to report the results based on the recounted votes, is legally required to take instructions from the Elections Commission.

Grounding her judgment in decisions by the Guyana Court of Appeal and the CCJ in similar and related cases, the Chief Justice said the Recount Order  was not unconstitutional,