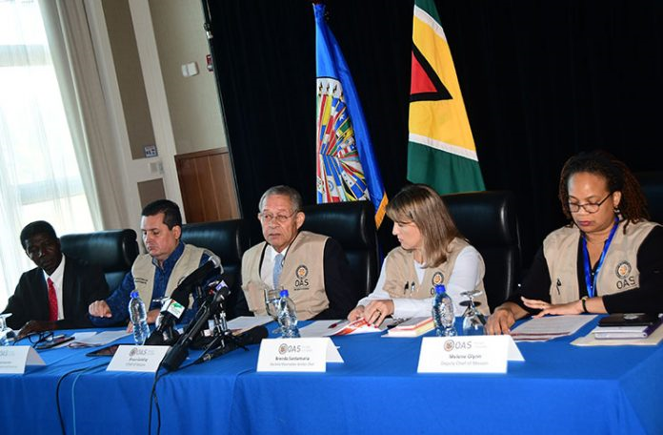 Even as it commended the people of Guyana for its strong democratic commitment, the Organisation of American States Electoral Observation Mission (OAS EOM) championed the cause for the voter registration system to be reformed, the restructuring of the Guyana Elections Commission, and the use of technological solutions for the tabulation of votes that would result in an early declaration of the results.

The OAS Mission, led by former Prime Minister of Jamaica, Bruce Golding, made its assessment of the March 2 General and Regional Elections known during a press conference at the Guyana Marriott on Tuesday. “The mission applauds the people of Guyana for their patience in awaiting the results of the poll and encourages them to continue doing so. The mission looks forward to the publication of the official results at the earliest opportunity,” Golding said in his opening remarks.

One day after the close of polls, the Guyana Elections Commission (GECOM) was unable to offer preliminary results on which of the nine political parties had won the General Elections. However, it has been providing statistics based on the processed statements of poll.

TABULATION OF RESULTS
Based on the mission’s observation, Golding said Guyanese are concerned about the length of time taken to tabulate and determine the results of both the General and Regional Elections, though cognisant of the challenges GECOM faces as a result of the country’s geographical layout and the employ of a manual tabulation system.

“Guyana’s largely manual electoral system requires the transportation of electoral materials, including the statements of polls, by land, water and air to the Returning Officers in each of the 10 Regions and to the Chief Elections Officer in Georgetown, in order to facilitate the tabulation, verification and declaration of the results of the elections,” Golding noted. It was further noted that the only area of automation in the counting process occurs at the CEO’s office where a computer application supports the tabulation of the results.
At such, the OAS Electoral Observation Mission made a strong case for enhanced technological solutions to be employed for the collection and transmission of images of the statements of poll and collated results from the various regions.

“The Guyana Elections Commission should consider implementing a system to issue preliminary results for national elections, in order to make this information available on Elections Day or on the morning thereafter. This would include establishment of a central computerised results receiving centre, where election results summaries are periodically sent via secure telecommunication lines from each of the 10 Regions across the country to the Chief Elections Officer. Scanned statements of poll can be sent to the CEO simultaneously to be published alongside the digitised electoral results,” the Chief of Mission recommended.

Official tabulated elections results, Golding further submitted, should be available online through GECOM’s website. Notably, GECOM has such a system in place; however, hours after the close of polls, it had experienced some technical problems. Nonetheless, it is believed that such an online system would result in a faster and simultaneous transmission of results to a wide audience. Article 99 of the Representation of the People Act provides for the declaration of elections results within 15 days.

RESTRUCTURING OF GECOM
The OAS Electoral Observation Mission, in its menu of recommendations, called for the restructuring of GECOM. The Constitution (Amendment) Act No. 2 of 2000 paves the way for the appointment of six members of the commission – three appointed by the President and another three appointed by the opposition based on the advice of the Leader of the Opposition. The Chairman of the Elections is appointed by the President from a list of six nominees proposed by the Leader of the Opposition. However, Golding told journalists that the existing formula is a recipe for division.

“The mission observed the polarisation among the members of the Guyana Elections Commission and the challenges this created in arriving at consensus on most issues. The divisions appear to exert undue pressure on the chairperson and the use of his or her casting vote to resolve decisions before the commission,” Golding explained.
This was the case in February 2019 when the then Chairman of the Elections Commission, Justice (Ret’d) James Patterson, had used his casting vote to support a motion for the conduct of house-to-house registration. Justice Patterson had come in for major criticisms from the opposing side.

Cognisant of the prevailing challenges, the OAS Electoral Observation Mission is recommending that Guyana engages in a multi-stakeholder discussion on the structure of GECOM in an effort to enhance the “deliberative nature and decision-making of the Commission.”

REFORM OF VOTER EDUCATION
Added to that, the OAS Electoral Observation Mission made a case for a comprehensive reform of the voter registration system on the basis that the National Register of Registrants Data Base and the Official List of Electors (OLE) are bloated. The current OLE has a total of 660,998 names, which is considered to be relatively high when the country’s population of 750,000 people is considered. “In explaining the reasons for the bloating of the list, the Guyana Elections Commission noted that it includes the names of persons who are dead or who no longer reside in Guyana. GECOM currently has no means of cleaning the list, save through the constitutional provisions for removal (a registered death, certified insanity or election offence) or through the claims and objections period.

Both the High Court and the Court of Appeal have ruled that it would be unconstitutional to remove Guyanese from the National Register of Registrants Database even if there are not present in Guyana at the time of a house-to-house registration, however, the OAS Electoral Observation Mission believed that electoral reform can produce a more accurate list.
“Comprehensive reform of the voter registration system, along with the necessary legislative authorisation for registration, changes to voter lists and submission of complaints about the exclusion or inclusion of voters,” Golding said while underscoring the need for house-to-house registration to be conducted as the earliest possible time. According to him, such exercise should be periodically conducted to cleanse the list.
The OAS Mission had arrived in Guyana on February 20 and comprised a total of 17 international observers from 12 countries, including specialists in the electoral registries, electoral organisation, electoral technology, electoral justice, campaign finance and the political participation of women.