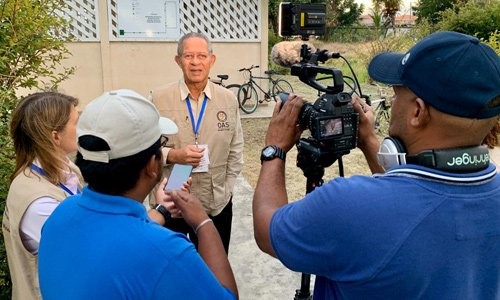 In a sign of the deepening crisis for Guyana and the caretaker Granger administration, the OAS election observer mission today announced it was withdrawing from the country as the tabulation process for Region Four is not transparent despite the many complaints about it.

In a statement, the Organisation of American States (OAS) mission warned that any government installed on the basis of these results would be open to question. A report is to be prepared for the OAS Secretary General.

A statement from the OAS mission follows:

Statement from the OAS Electoral Observation Mission in Guyana

The process being conducted by the Returning Officer for Region 4 to ascertain the results of the national and regional elections held on March 2 does not meet the required standard of fairness and transparency.

This has not occurred. Instead, and without any plausible explanation, the Returning Officer continued to ascertain the votes cast for each party list without affording the duly authorized candidates and counting agents an opportunity to see the Statements of Poll, in order to compare them with the copies in their possession. Such a process could have been easily facilitated using the same technology which allows the tabulation to be displayed.

The Mission has noted that images of the Statements of Poll published by the PPP/Civic, on its website, which it claims were given to its polling agents after the ballots were counted at each polling station on the night of the elections, produce a result that is vastly different from that being declared by the Returning Officer and would have a decisive effect on the outcome of the national election.

To date, neither the Chief Elections Officer nor APNU has challenged the authenticity of the Statements of Poll published by the PPP/Civic by producing the copies in their possession. The implications are deeply troubling and make it all the more necessary for the Returning Officer to display the Statements of Poll on which he is relying.

The OAS Election Observer Mission was pleased to have declared that the March 2 poll was, in almost all respects, well executed. The subsequent tabulation of the Statements of Poll in the other nine regions was carried out in compliance with the law and no dispute has arisen in relation to the declaration of results.

However, the process employed by the Returning Officer for Region 4 is not transparent and, based on the numbers that have emanated since the process was first disrupted, is unlikely to produce a result that is credible and is able to command public confidence.

The legitimacy of any government that is installed in these circumstances will be open to question. This would be a terrible blow to the country’s democracy. The people of Guyana do not deserve this.

Given the circumstances cited above, the OAS Electoral Observation Mission regrets that it has no option but to withdraw from Guyana. The Chief of Mission will prepare his report for submission to the Secretary General.