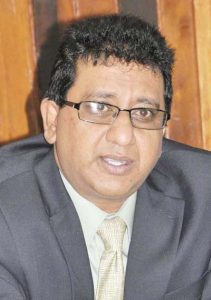 News that the Guyana Election Commission (GECOM) will be making over 91,000 changes to the Revised List of Electors (RLE) is not going down well with the Opposition – People’s Progressive Party Civic (PPP/C).
On Wednesday, former Attorney General Anil Nandlall said that the move taken by GECOM is not catered for in law.

Nandlall described the news as “shocking”. Questioning the basis for GECOM’s actions, he pointed out that there is no provision in the law for changing the RLE outside of the statutorily provided process.
“It is the data generated from the incredible Houses-to-House Registration exercise, commenced by an illegally appointed Chairman of GECOM, which GECOM itself aborted. As have been repeatedly stated, this data was never the subject of a Claims and Objections exercise which would have showcased it for public scrutiny and, to date, it remains unverified.”

“I have made the point repeatedly that elections are a statutory process which requires strict compliance. This process provides adequate mechanisms of safeguards which protect the process. In this respect, Guyana is no different from the rest of the Commonwealth.”
He pointed out that when the Preliminary List of Electors (PLE) was first published and posted around the country, the law allowed for persons to use the Claims and Objections period to inspect the list and make any changes to their particulars.

“It is significant to note that the Claims and Objections exercise yielded a total of less than 7000 changes to the PLE. The law requires these changes to be effected after which the Revised Voters List is produced which ought to have captured these changes.”

“There is simply no provision in the law which allows for these 91,000 changes to take place. To do so would be ultra vires, unlawful and illegal. Moreover, it is outright dangerous to facilitate this now, since, there is no opportunity for anyone to examine what these changes are before they are incorporated into the Official List of Electors.”
According to Nandlall, it can lead to confusion and switched addresses when persons do go to vote on March 2. But he noted that by then, it will be too late to make changes and persons may be unable to go to the right polling station.

“For example, on the PLE, I am registered to vote at a Primary School in Campbellville, Georgetown. I do not know whether I am one of those ninety-one (91) thousand changes. I will only know that when the OLE is published.”
“And if on the Official List of Electors my address is now changed to Timbuktu, I will have no opportunity of correcting that error and I will not be able to vote. Just imagine if this happens to, not 91,000 persons, but just 50 per cent of that— the mayhem that will result,” he questioned.

Missing names
At the conclusion of Tuesday’s statutory meeting, it was announced that over 91,000 changes garnered during the controversial House-to-House Registration exercises would be made to the addresses of persons on the RLE.
While the Government-nominated Commissioners in GECOM were in full agreement of this decision, the parliamentary opposition was unhappy about it and had demanded to be provided with a list of those changes.

GECOM had agreed to do this by Wednesday. But when this publication made contact with Opposition-nominated GECOM Commissioner Robeson Benn, he revealed that only approximately 58,000 of the names were handed over. He had also expressed reservations that this may be a backdoor attempt to confuse the process and had noted the importance of being able to check the list of changes.

“I did receive from the Election Commission a flash drive with that information. We’ll have to sit down and try to verify the information… until we look at it in detail, we can’t say that as yet, but we know there is that risk (fraud). Also the risk of creating massive confusion on Election Day,” Benn said.

Speaking with Guyana Times on Tuesday, PPP/C’s Chief Scrutineer Zulfikar Mustapha said that the international community should take note of this occurrence at GECOM. He had called on the Chair of GECOM, Retired Justice Claudette Singh to address this matter frontally.

“This is a deliberate ploy and will create a mass of confusion on Election Day. This confusion we had in 1990 when the entire list had to be scrapped and they had to do fresh House-to-House Registration. So it seems as if this is a deliberate ploy by the Secretariat to effect these changes,” Mustapha said. According to him, this can lead to the issue of persons not finding their names in the respective areas/divisions.