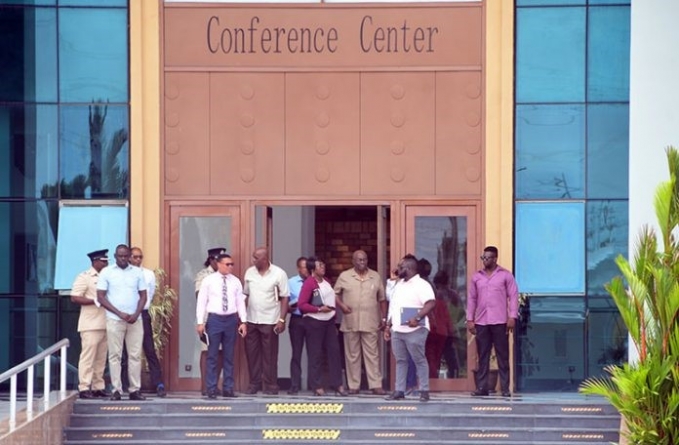 THE commencement of the recount of ballots cast in the General and Regional Elections from the ten administrative Regions did not commence as planned on Monday.

Plans began relatively smooth on Monday morning when the Guyana Elections Commission (GECOM) conducted a walkabout at the Arthur Chung Conference Center, along with members of the CARICOM high-level team, to ascertain whether the venue would be suitable for the activity. The media was then made aware that the Commission had made arrangements to have the building fumigated. There was later some confusion on whether this was in light of the novel coronavirus disease (COVID-19) or for vector control.

Nonetheless, at around 13:00hrs, Commissioner Sase Gunraj came out of the building to voice his frustration to the media that it was getting late and the ballots to be counted had not yet arrived at the Center. He said that he had received no official communication from the Commission or CARICOM on what was to take place since his last interaction with the media Sunday night.

On Sunday night, he and Commissioner Vincent Alexander had told the media that following the agreement of President David Granger, Leader of the Opposition, Bharrat Jagdeo and the CARICOM team, the Commission had successfully crafted a Terms of Reference (TOR) document to guide the way forward. 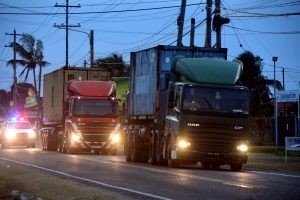 It was expected that following the walkabout and arrangements for other logistics, the recount would commence at least by mid-day on Monday. However, Gunraj told the media after noon yesterday: “While we’re all concerned about the emergence of this COVID-19 virus and we’re obligated to take precaution, the reality is we have a nation that awaits and I’m not sure what will kill us first, GECOM or the spread of COVID-19.”

At 15:30hrs, GECOM Public Relations Officer (PRO), Yolanda Ward, sent out a release stating that all arrangements were in place for the commencement of the national recount but the President, Opposition Leader and CARICOM team first needed to ink an agreement.
“The Guyana Elections Commission has completed all the preparatory arrangements for the commencement of the national recount exercise as agreed to by H.E. President David Granger and the Leader of the Opposition, Mr. Bharrat Jagdeo with CARICOM. However, while the Commission has considered the request in principle and has approved, a signed agreement between the Leaders and CARICOM is essential in order for the process to be operationalized,” the release stated.

However, more time passed and these individuals were seen sitting and standing near the drive way at the back of the building where the containers were placed. They had no information on when the recount would take place. Soon, it got even darker and, around 18:30hrs, Opposition Executive Anil Nandlall came out to brief the media.

He said that the process was being held up by an aide memoire (a document produced to summarise key findings and important recommendations) needed to be signed between President Granger and the Leader of the Opposition before the recount could begin. Nandall said: “That document was sent since last night and the Leader of the Opposition essentially approved it and it was sent to the President and the President is apparently claiming that he needs legal advice. It’s a one-page document and it essentially captures what the CARICOM statement says so I don’t know what is there to get legal advice on.”

He questioned the basis for the delay stating that the recount of Region Four could take “nearly two weeks”. A short time after reentering the building, Nandlall exited again stating that political representatives were being put out of the center by “riot squads” leaving insufficient security for the ballot boxes.

“All these people here are authorized persons. There is no unauthorized person in that compound,” he said. “Yet we were all told to leave… [we were told] leave or face arrest.”

It was later explained to the media that Deputy Chief Election Officer (DCEO), Roxanne Myers had informed those in the building that the center would be closed for the night and no recount would be taking place. Inside the compound of the Center, things escalated when Opposition-nominated Commissioner Robeson Benn refused to leave and took up firm position by lying flat on his back on the floor of the walkway out of the building.
After speaking to Benn sternly and noticing no change, Benn claimed that the police sought to physically remove him from the compound but he held on to the rails. He told the media that he held his position until he was met by PPP/C Executives Dr. Frank Anthony and Priya Manickchand. Eventually, it was decided that at least one representative from each party would remain at the location. Up to press time, containers with ballot boxes for Regions Three and Four were at the location.

“I’m very unhappy at the action of the police force,” Benn said when he was outside the compound. “They ought to be aware of my position as a statutory Commissioner of an independent agency and that by no possibility could they be attempting to physically remove me from the position I was in.”

Benn said during the event he received injuries to his shoulder and might be taking legal action. He also expressed his frustration about the failure on the Commission’s part to restart the recount noting that the planned fumigation mentioned earlier did not take place until 17:30hrs.

“I presume that we will hear from GECOM tomorrow. I think that what is happening and the way it’s communicated to us as Commissioners is highly unprofessional and also very suspect,” he said. “There’ve been hours of delay, hours of delay.” Later, a small crowd of supporters gathered at the front of the conference center but nothing noteworthy unfolded.