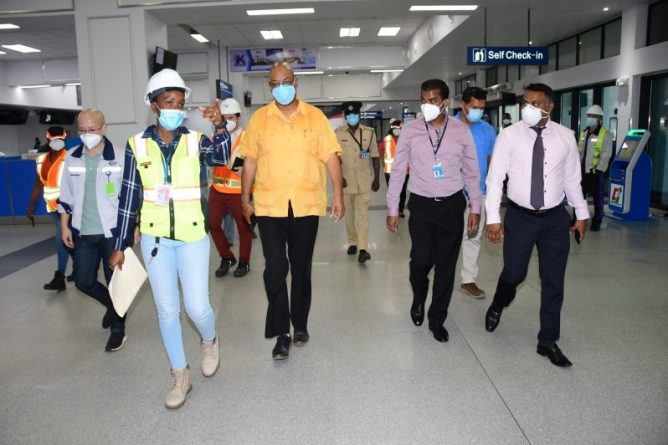 EXPANSION of the Cheddi Jagan International Airport (CJIA) has been ongoing for almost seven years, moving from one deadline to the next, but government believes that “Enough is enough!” And it is in light of this that Minister of Public Works Juan Edghill firmly said he will not be granting any further extension to the project.

In 2011, the then People’s Progressive Party/Civic (PPP/C) administration and China Harbour Engineering Company (CHEC) inked a $31.2B (US$150M) contract for the CJIA expansion. This project was reportedly due for completion in December 2017, but was reviewed by the former A Partnership for National Unity + Alliance For Change (APNU+AFC) Government, and a deadline of December 31, 2018 was set.
Now, almost two years later, the project remains incomplete. And, while the new PPP/C administration believes that concerns and problems related to the project are many, their intention is to see the project to its completion, in keeping with the agreed scope that was signed on to.
This position was made clear by Minister Edghill following an inspection on Friday of the work being done on the facility.

Minister Edghill, who was accompanied by Minister within the Ministry of Public Works Deodat Indar, said government will be working closely with the contractor and other technical staff to ensure that they get the desired results as outlined in the scope of the project.
In doing so, the contractor will have to work within a strict timeframe, as the minister said government will not be granting any further extension of the project.
Minister Edghill has given the contractor five days to prepare and present a revised plan for the project. This plan is expected to include agreed timelines for completion, among other things.

“We are way past the completion date, and are in the period of liquidated damages… So, anything that could have gone wrong has already gone wrong,” the minister lamented.
The approximately US$150 million project was signed as an agreed package, including design, building and handing over. Edghill said over US$144 million has already been expended on the project, and the work is yet to be completed.

GET THE RESOURCES
The minister said government stands ready to facilitate the importation of resources that are needed to complete the project. The Novel Coronavirus (COVID-19) had presented travel barriers, but this should no longer be used as an excuse, said Edghill.
“We need to get on with it… COVID-19 will no longer be used as an excuse,” the minister said, adding: “Government has given instructions for all works to recommence… So, getting Chinese technicians and experts into the country is no longer a problem.”

The Guyana Civil Aviation Authority (GCAA) has already granted permission for chartered flights to land here, and Minister Edghill said the same courtesy will be leveraged to the CHEC, once they follow the necessary COVID-19 protocols and guidelines that are in place.
“We have to get all materials imported; get personnel, and get done what needs to be done… I am advised that all the requisite letters for corrective and remedial work have already been issued to the contractor,” said the minister.

THE BIGGER PICTURE
While the immediate focus is the expeditious completion of the project, the “bigger picture” is how the project has been ‘mismanaged’ and ‘corrupted’.
“What should have been a new airport has turned out to be a renovated airport… The old terminal buildings were supposed to be for the purposes of cargo. But, as you saw, those things were renovated, and just one section was built,” Minister Edghill lamented.
Blame was, however, not placed on the contractors, as the minister said the contract was remodelled by the past administration. It excluded a large section of work, but the price did not change.

The initial project included the extension of the runway from 7,500 to 10,800 feet. This is to accommodate the BOEING 747-400 aircraft. It also included eight passenger boarding bridges, among other things.
Through the revised contract, only four air bridges were installed, because no new building was built for the apron. Additionally, the four bridges malfunction from time to time, so those will have to be fixed.

“We still have issues that have to be addressed, because of the reworked scope which was crafted by the Granger administration, which lessened the footprint,” said Minister Edghill.

Provisions will also have to be made for vendors for restaurants, and spaces will also have to be created for adequate office accommodation for commercial airlines.
CJIA, at this time, is also seeking to do things that were listed in the initial contract, but, in effect, government, through the revised contract, is getting less than what was presented to the past PPP/C administration at the time of the signing.

“Even though we are paying the same amount, we did not get on time what the contract stipulated for us to get,” said Minister Edghill.
Likening the Cheddi Jagan International Airport (CJIA) expansion project to “adding lipstick to a pig”, Minister Indar said the “renovation” is a burden on taxpayers, and not much was gained.

He too, however, advised that government must move past the impasse and get everything done and remedied in a timely manner.