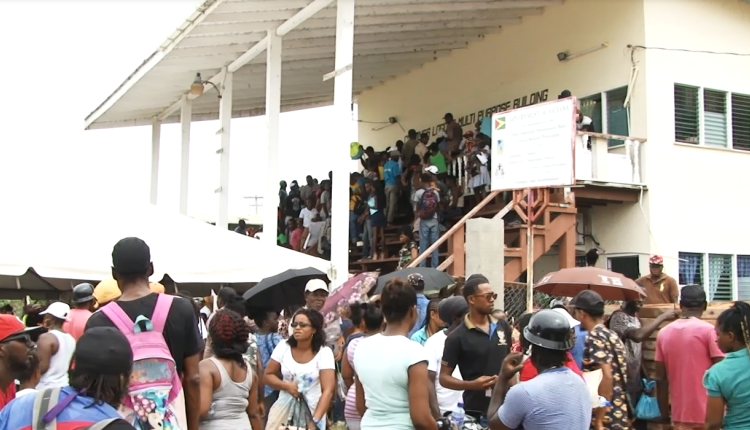 A large number of Guyanese who began to squat in the Cummings Lodge/Sophia area have threatened not to vote at the March 2 general and regional elections if the Government does not give them house lots.

Some twenty persons began to set up house in the area behind the Eugene F. Correia International Airport last week but this number has since increased significantly by Monday.

The News Room understands that the locals were reportedly told that the Central Housing and Planning Authority (CH&PA) is distributing lands and so they decided to squat at the location.

But the Housing Authority is not removing the squatters and instead set up a booth at the Community Centre in Cummings Lodge where they asked them to visit and submit their house lot applications.

On Monday, hundreds of squatters and residents gathered at the location, hoping they would get a plot of land immediately.

Minister within the Ministry of Communities Annette Ferguson at an impromptu press conference Monday at the CH&PA’s Brickdam, Georgetown office addressed the situation.

“Yesterday [Sunday] I received a call from someone on the West Coast [of Demerara] and she asking me – she was told that CH&PA is allocating lands in the Cummings Lodge area, bring a $100,000 and you will be given an allocation- and we have not allocated any lands out there,” the Minister said.

Minister Ferguson also visited the Community Centre which was filled with squatters Monday and pleaded with them but this proved to be futile.

Chief Executive Officer of the CH&PA Lelon Saul said the land where the locals are now squatting has been earmarked for the development of the Ogle/Timehri road bypass.

“Historically whenever we come around this time of silly season it is usual to find such activities and I want to appeal to citizens do not listen to persons who will misguide you and encourage you to occupy state lands because it is elections time and therefore no one will move you,” Saul said.

Meanwhile, when the News Room visited the booth in Cummings Lodge, residents threatened protest action and also to withhold their votes.

“In Sophia, the biggest community the youths need land and if the Government do not give us no land we are not voting in Sophia.

“The youths them only know about squatting, they don’t know about nothing else, how I get land here years ago is because I go and squat, y’all cannot vex with them, that is what they know and learn,” one of the squatters told the News Room.

Other residents echoed the same sentiment, shouting “No land! No vote!”

“I am living on the reserves for nine years now, I would like to know and ask the representatives of this country, how long more we as Guyanese citizens have to sit and wait on 83,000 square miles that are hardly occupied,” another squatter said.

Another squatter claimed that the CH&PA is making the process difficult to apply for land.

Minister Ferguson said they are working with agencies such as the Guyana Lands and Surveys Commission, the National Industrial & Commercial Investments Ltd. (NICIL) and the Guyana Sugar Corporation (GuySuCo) to procure lands to allocate to the citizens.

“We ask them to submit their acknowledgement letters to us this morning and we also went further by encouraging those who never apply to walk with their requisite document to do on the spot registration,” Minister Ferguson said.

She highlighted that these new applicants will be treated just like any other applicant.

“They would just be like first time applicant or recent applicant now applying; you have 1000 of persons who are still waiting allocation.”

The CH&PA is asking that residents in Sophia, Cummings Lodge and Industry be vigilant and look out for public mischief especially around elections time.