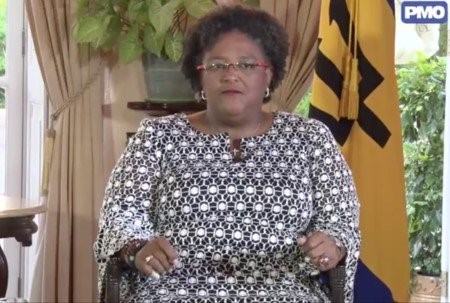 Outgoing CARICOM Chair, Barbadian Prime Minister Mia Mottley today expressed her concern that Guyana’s elections “confusion” is still to be resolved as of July 3rd and cited the need to await the ruling on Wednesday of the Caribbean Court of Justice.

She was speaking this morning at a special virtual conference to hand over the six-month CARICOM Chairmanship to Prime Minister Dr. Ralph Gonsalves of St. Vincent and the Grenadines.

Mottley who has won kudos for the firm stand she has taken on Guyana’s elections pointed out to regional leaders that CARICOM had supported the process here by dispatching two observer teams: one for the usual observing of election day procedures and another for the recount of votes when problems arose.

That recount report has shown that the opposition PPP/C has won the elections.

As she handed over to Gonsalves, Mottley said that Guyana has a bright future and must have one that makes every Guyanese a winner.

She contended that “we cannot ignore principles when it is inconvenient not to stand by them”. She adverted to the CARICOM Charter of Civil Society which binds all of its members to democratic and other standards.

Mottley has expressed bewilderment at the recent attempt by the Chief Election Officer, Keith Lownfield to strike out over 115,000 votes.