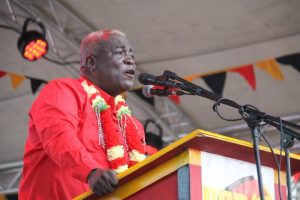 The opposition People’s Progressive Party Civic (PPPC) said it selected retired Brigadier, Mark Phillips as its prime ministerial candidate to look after the welfare of Afro-Guyanese.

“His selection was very important to Afro-Guyanese to ensure that their interests are looked after and the APNU+AFC idle attacks on the PPP on the question of race relations was nonsense and divisive,” Lumumba told the meeting that was held in the predominantly Afro-Guyanese community of Lodge, Georgetown.

Lumumba said the selection of Brigadier Marks Phillips as the PPC’s PM candidate was not an accident, but rather the result of careful analysis of dozens of candidates. Other known candidates for the PM spot were Hugh Todd and Juan Edghill.

Already Phillips, a former Chief-of-Staff of the Guyana Defence Force (GDF), has sought to assure Guyanese that he would represent all Guyanese regardless of their race, religion or political affiliation if the PPPC wins the March 2, 2020 general and regional council elections.

Lumumba, a former presidential advisor on empowerment, defended Phillips’ appointment about two weeks after General Secretary of A Partnership for National Unity (APNU), Joseph Harmon told a public meeting in Buxton that it was “contemptuous” of the PPPC to have put up Phillips, a “Black face” as a means of buying Afro-Guyanese support.

Phillips has since reacted sharply to Harmon, arguing that by the same logic East Indo-Guyanese in the APNU+Alliance For Change (APNU+AFC) coalition’s leadership are tokens. The former army chief said Guyanese must be free to join any political party of their choice.