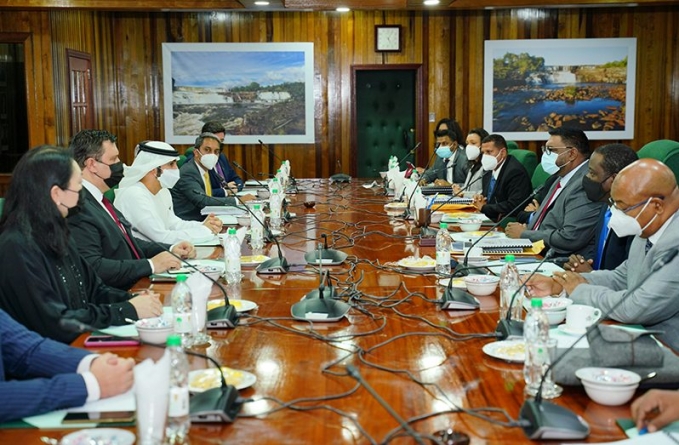 A PLETHORA of investment opportunities, across all the major sectors in Guyana, were examined by a high-level team from the United Arab Emirates (UAE), during discussions with the Government of Guyana, on day one of the team’s three-day visit here.

The eight-member delegation, headed by his Highness, Sheikh Ahmed Dalmook Al Maktoum of the UAE, arrived in Guyana on Thursday and has already met with President, Dr. Irfaan Ali and several other high-ranking officials of the Guyana Government.

Among some of the areas of interest discussed during the meeting were oil and gas; infrastructure and agriculture. Individual members of the team were interested in specific sectors, but this newspaper understands that the “key sectors” took “centre stage”.

The Guyana Chronicle understands that the discussion was informative and ‘faithful’ and there was an air of optimism that Guyana will benefit from several investment projects.
Present at the initial meeting with President Ali and the UAE team were Vice-President, Bharrat Jagdeo; Foreign Affairs and International Cooperation Minister, Hugh Todd; Natural Resources Minister, Vickram Bharrat; Housing and Water Minister, Colin Croal and Minister within that Ministry, Susan Rodrigues; Agriculture Minister, Zulfikar Mustapha; Public Works Minister, Juan Edghill; and Chief Executive Officer (CEO) of the Guyana Office for Investment (Go-Invest), Dr. Peter Ramsaroop, among others.

The UAE is no stranger to major international investments; in fact, the Sheikh is the founder of a diversified conglomerate, the Africa, Middle East Resource Investment (AMERI) Group.
As the founder and the Chairman of AMERI Group LLC, His Highness established strategic partnerships in many countries to create a better world for the underprivileged.
He has played a path-defining role in extending a helping hand to bring about a positive change in the lives of millions.

The AMERI Group itself has diversified into a conglomerate that develops, invests, co-owns, and operates power plants, energy and infrastructure projects mainly in Africa and the Middle East.

Through AMERI Energy, the group has provided economical, innovative and clean energy solutions. The AMERI Infrastructure division specialises in solutions with a reputable clientele.
Guyana is no stranger to such institutions and countries with a deep interest in international investments. Within the space of three months, the country has hosted the U.S. Secretary of State, Mike Pompeo, and the President of Suriname, Chandrikapersad Santokhi, and other high-level officials.

This unprecedented interest in Guyana is due mainly to the country’s nascent oil and gas sector, which is expected to catalyse development across all sectors.
President Ali has already said that progress is expected on all fronts in 2021, which has since been designated as the Year of Investments and Development.
“What you will see next year is a flurry of development; there will be active work on the new Demerara Harbour Bridge, the new four-lane road, new hotels, and the creation of 50,000 homes,” said the President.

He said work will commence on the construction and rehabilitation of roads in hundreds of communities; new infrastructure will be created, and there will be major developments in every sector.

Additionally, private sector investments are expected to increase, stretching from the construction of new shore bases to service the oil-and-gas sector, to new office complexes and other private development projects.

The President anticipates that, with increased construction, there will be an increased demand for quarry and construction materials and labour.
The World Bank’s Ease of Doing-Business 2020 report has showed that Guyana slipped two spaces in its rankings for 2019, relative to 2014. Among the problems identified in the report were the processing of construction permits, registration of property and high taxes.

But, with renewed and increased interest in the local economy, Guyana has an opportunity to assess its systems and create processes which are business-friendly and encouraging for not just international investors, but locals as well.

The new Government has already committed to building a ‘modern’ Guyana with world-class infrastructure that improves connectivity and unlocks the vast potential of the economy.
“Becoming an oil producer presents us with an opportunity and the means to improve the well-being of the Guyanese people and realise the long-standing aspirations of the country,” said Senior Minister with responsibility for Finance, Dr. Ashni Singh in a recent report.

The aim is to create an enabling environment for business development through a seven-point plan which includes preserving the rule of law and democracy; improving the ease of doing business; enhancing national competitiveness; facilitating trade and investment; and supporting small businesses.