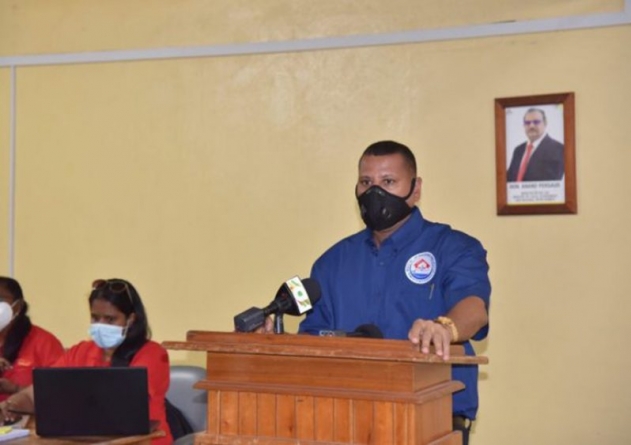 THE housing sector in Lethem, Upper Takutu-Upper Essequibo (Region Nine), is set for major transformation, as the Ministry of Housing and Water kick-starts planning for its 2021 programme with current surveys.

Subject Minister, Collin Croal, said the objective in Region Nine is to create a housing plan that suits the regional landscape, while ensuring that it projects the image of a developed region. The Minister made these statements during an outreach in Lethem on Friday last.

“Our vision here is that we want to ensure that we provide an opportunity, especially for our young people, to go on to own their own homes, to ensure that they will be able to start their family in a different environment,” Minister Croal was quoted by the Department of Public Information (DPI) as saying.
This is important, he added, as the town “is growing because persons are seeking employment in the central location and because of the expected expansion here in Lethem for a business community and other opportunities.”

For this reason, the Surveying Department of the Central Housing and Planning Authority (CH&PA) is charting Poke Bridge, Lethem for a new housing area.
Also, following recent discussions with the Guyana Lands and Surveys Commission, the Minister said, consideration is being given to develop Culvert City – Phase Three, according to DPI.
“What this means for you here in Region Nine is that by the middle of December, in our planning, we will be made aware where we will be embarking on our next area or project of housing allocations,” Minister Croal said.

Since the regional demand is land for construction, this will be the main area of focus. However, there are long-term plans to construct housing units, although the prospects are unclear at this point, until the surveys are done.

Minister Croal said he is hopeful that the land will soon be within the purview of the CH&PA and infrastructure works such as land clearing and road networks, can follow to start allocations.
He added that people must have access to basic utility services and Housing will be collaborating with the Guyana Water Incorporated and Guyana Power and Light Company to ensure these services are in place.

While housing in Lethem is projected to cost less than that on the coastland, it is still expected to provide some of the same spin-off benefits such as job creation.
The Minister noted that the difference in soil type plays a major role in the services needed.

“Here (Lethem) is more land clearing and in Lethem [it] will cost less because some of the lands we have on the coast are more of sugar cane and the soil type will be soft and so a lot of base work has to be done. But here the soil type where we’re looking at is more compact and, in some areas, [it is] rock,” he explained.

Minister Croal highlighted that Region Nine currently has 557 active land applicants in the CH&PA system and the initiative is also geared at reducing this backlog.