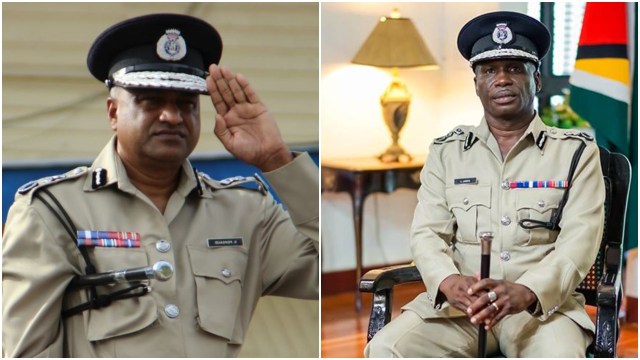 As I make this appeal to you, I would like you to know that I am not a member of any political party. My service in the Guyana Police Force for over thirty three years has been nothing but professional and during that time I strive to uphold and maintain the highest values and standards of a professional Police Force which includes staying away from political activism and sentiments.

Our beloved country is now at the edge of a precipice. Another step in the direction it was moving since on or about March 3rd 2020 ( at the GECOM Region 4 RO’s office in particular) will cause us to fall over into unimaginable consequences from our own society and the International Community.

Consequences that will not only manifest into hardship and suffering for us but also for our children, elder and younger relatives and our relatives of the future. Everything in my heart tells me that the people that socialize in what was a home for me for thirty- three years do not want this to happen. Unfortunately, we cannot wish it away.

My thinking and experiences tells me that anti- democratic action of a few in our society cannot bear fruit without support of the Police. Let us not throw our honour to the dogs. Let not the necessity of Public Protection against deviance be submerged by outflows of sentimentality.

It is on the Police that the society must rely for the immediate and effective protection of people’s Constitutional Guarantees. Let us not fail them. The situation in our country is grave and , as we are aware, political efforts to bring us through have failed over and over.

It is left to the Police to give life and meaning to the enjoyment of civil rights by the law abiding members of our society. So it is crucial that you do not act as you did at the Region 4 RO’s Office and the Arthur Chung Convention Center when you evicted people who had a legal right to be there and who were advancing the protection of Construction Rights of the Guyanese People.

Let us not deny that every government needs a rigorous Police Force to protect the rights of it’s citizens.

However, let us understand that in a free regime the Police are employed against the minority opposed to the general good as well as against abuse and negligence of the authorities.

On the other hand, in a tyrannical regime, the Police are employed against ordinary and law abiding people who are delivered into the hands of injustice and impunity. In the latter case, the Police looses it’s professionalism, independence and Control and the people that suffers includes their relatives, friends and themselves. Is that what we want?

Please note that should your actions at the two places I mentioned continue, you will find yourselves separated from the community. Such separation will create social distance that will increase the extent to which the Force could be controlled and the extent to which the Police are seen as visible symbols of the government and targeted as such.

I appeal to you to use those understandings in giving instructions and taking action. I appeal to you to take professional action and save our dear country from the few dissidents. The society you served had never been so heavily dependent on you in contemporary times.