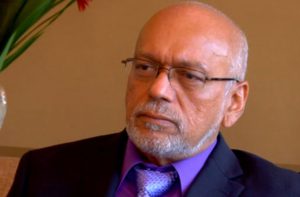 Ex-President, Donald Ramotar, faced a series of questions in relation to the merits of the contracts, his government signed with four oil companies in 2015 for deep water exploration in the Canje and Kaieteur oil blocks.

Under crossed examination by Attorney-at –law, Nigel Hughes, Ramotar admitted under oath that his administration signed deals with oil companies that had no track record of exploration.
The former President has sued Kaieteur News for exposing the questionable circumstances under which the deals were signed.

In an advertisement, the newspaper pointed out the similarities between the action by the Ramotar administration and Senegal, an oil-rich West African country. Both countries allocated oil blocks to companies with no known experience in the oil industry.
In Senegal, the oil blocks were signed away to a convicted drug lord; in Guyana, the owners of the drug blocks were unknown until the newspaper tracked down the contracts.

The former President in turn accused the newspaper of publicising false and slanderous information which immeasurable damage to his character.
He sued Kaieteur News, its Publisher Glenn Lall, and Editor-in Chief Adam Harris for in excess of $10 M for libel.
During court proceedings on Monday, the former President was questioned specifically on his Government’s decision to hand out oil contracts just prior to the May 2015 elections.

He was asked specifically about his familiarity with the companies, which benefited from the deals. He was asked about each company.
The former President admitted that he is not aware of the experiences in the oil fields as it regards the first company —Mid Atlantic Oil and Gas Inc.
“Were you familiar with the name Mid Atlantic Oil and Gas Inc.?” Hughes asked.
“Yes,” he replied.
“And as far as you are aware that company was incorporated in Guyana?” the attorney followed up.
“Yes” Ramotar said.

Questioned further about the company, the witness told court that he was not aware that it had any track record of oil discovery or exploration.
According to him, the only experience he was aware of, related to the principal of the company, Mr. Edris Dookie.
He said that Mr. Dookie was responsible for searching for oil in Guyana waters since 1986; that he had some experience in the field.

“Were you aware of the identities of the partners who were with him in Mid Atlantic Oil and Gas Inc.?” the lawyer asked.
“I know that there were but I don’t have all the recollection,” Ramotar responded.
Further asked about the exploratory knowledge of any other persons involved in Mid Atlantic Oil and Gas Inc Ramotar told the Court that he can’t specifically recall anyone.

The former President was then grilled on the due diligence undertaken prior to signing the contracts. In response, he told the Court that it was the Guyana Geology and Mines Commission,(GGMC) and the Minister of Natural Resources that were responsible for conducting the technical work.
Based on suggestions by the Attorney, Ramotar admitted he is unable to provide information on prior exploratory experience of companies.
As it regards to Ratio Energy and Ratio Guyana Inc, Ramotar told the Court that he was not familiar with principals of the companies.

He said instead that he relied heavily on the advice of GGMC and the Minister of Natural Resources that the persons attached to the company had prior experience.
The Attorney therefore enquired from the witness whether GGMC had provided him with documentation that indicated Ratio’s prior experience in exploration.

“No they didn’t provide me with documentation; they informed me, and they advised me,” he replied.
“Okay, so you never saw any written document from GGMC or any other state agency that may very well have said that this is the experience of Ratio?
“That would be correct,” Ramotar admitted.
“In relation to all the companies (Mid Atlantic Oil and Gas Inc., Ratio Energy, Ratio Guyana and JHI Associates) were you aware whether any of them had any successful exploratory experience?”

“I don’t have any information of them directly but as I mentioned, I was advised that these were companies,” Ramotar maintained
As such, the Attorney then suggested that the terms of the contract and licences put Guyana at a disadvantage with regards to benefits.
The former Head-of-State nonetheless disagreed with the suggestion.