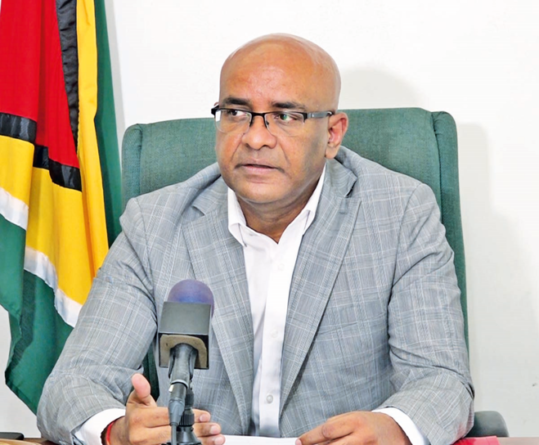 General Secretary of the Opposition People’s Progressive Party (PPP) Bharrat Jagdeo on Tuesday night called on the Guyana Elections Commission (GECOM) to follow the statutory process which allows Returning Officers to make declarations of the results as soon as regional tabulations are completed.

Jagdeo, who is also the Opposition Leader, said that GECOM had promised observers and political parties that this law will be followed.
“The Chief Elections Officer (Keith Lowenfield) said as is required by law, the ROs, once they do the tabulation and verification with the party agents and the observers present, they shall declare the results. Many regions have already gone through that process. They have completed the tabulation, they have completed the verification in the presence of observers, yet they have failed to make the official declaration at the level of the district,” he pointed out.

According to the Opposition Leader on Tuesday evening, there seemed to be a second set of instructions.
“I made it clear that the second check by the CEO is not part of the statutory process but they can still pursue that and treat the declarations at the regional level as preliminary results because in any case, once the ROs make a declaration then you have up to noon the following day to submit any requests for recount if a party wishes. But we don’t see any attempts to do so now and it seems as though they all have instructions to report back to Georgetown,” he noted.

Jagdeo said this is unusual and as such, the PPP/C has urged the observers to prevail on GECOM to follow the law and ensure the CEO keep his promise to everyone that the ROs will perform what is required by law, that is, after the verification have been made, they should make the declaration.

This statement was made by Jagdeo just after 18:00h. Results from ROs started trickling around 19:00h on Tuesday. The CEO had indicated on Monday night that these regional results were expected since midday on Tuesday.
Nevertheless, the PPP/C General Secretary noted that the party’s numbers indicate that it is in the lead but it will await GECOM to make an official declaration but will respect the Memorandum of Understanding that the party’s Presidential Candidate, Irfaan Ali, signed.

“…We will not declare results before GECOM does so officially. We’ve done our numbers and the numbers show us in an unassailable lead,” Jagdeo asserted.
He went on to say that the delays in the results affect citizens as well as businesses, as tension is on the rise in the country.
“…one of the things we were resolved in these elections to do, and I think a lot of the observers came here insisting that there be a clear pathway to early declaration without compromising the quality of the verification. They’ve done so conscious of the trauma that people have faced after elections when you have prolonged delays in declaring the results,” he stated.