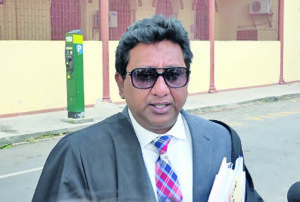 People’s Progressive Party/Civic (PPP/C) Executive Anil Nandlall has secured an injunction in the High Court to restrain officials of the Guyana Elections Commission (GECOM) from declaring the results of the 2020 elections, unless the electoral process as prescribed by law is compiled with. The law in question provides for among other things, a verification of the election results.

The injunction granted by Justice Navindra Singh in the civil jurisdiction of the High Court was to be served on officials at the GECOM Command Centre, Hadfield Street, Georgetown.
According to the document, failure to comply with the Court order could result in the parties being held in contempt of court. The parties may also be liable to a term of imprisonment and have their assets confiscated.
Nandlall arrived at the centre around 15:00hrs (3:00 pm) yesterday, in the company of two court marshals. He was however unable to serve the writ, since the officials to receive them were nowhere to be found.

The injunction issued in accordance with Section 84 of the Representation of the People Act restrains GECOM either by itself, its servants and/or agents, and each and every one of them, from in any manner whatsoever, declaring the total number of valid votes of electors for each list of Candidates recorded in the Guyana National and Regional Elections 2020.

It stated further that no declaration by GECOM must be made until and unless the Returning Officer (RO) Clairmont Mingo, Election District Number Four in Guyana and the Chief Elections Officer Keith Lowenfield, comply with and ensure the compliance of the process set out by the provision letter and spirit of section 84 of the Representation of the People Act, Cap 1:03, Laws of Guyana.

According to the documents seen by Kaieteur News, the applicant, Reaz Holladar made an oral application at the High Court for judicial review.
The move came after apparent attempts earlier by Mingo to declare the results for Region Four, even though there had been an agreement between the PPP/C and GECOM for a further verification, following a dispute over the authenticity of data.