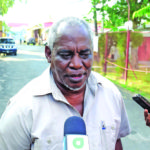 Opposition-nominated Commissioner on the Guyana Elections Commission, Robeson Benn, has once again alleged harassment and verbal threats by police ranks early this morning (Saturday, March 21, 2020) when he turned up at the GECOM Headquarter in Kingston, Georgetown, to check on the ballot containers.

According to Benn, “I now feel threatened and targeted by elements in the Guyana police force.”

This comes on the heels of the GECOM Commissioner being assaulted on Monday night by ranks from the riot squad whom he claimed dragged him out of the Arthur Chung Conference Centre.

Here is the full statement made by the PPP/C GECOM Commissioner Robeson Benn:

Had an unsettling experience, again, with police ranks.

I arrived at the GECOM HQ in Kingston at around 3:40 am to be denied entrance initially to compound! Special Constabulary female rank came out to demand why I was there I identified myself…and heard others at the post telling her it was Commissioner Benn!

She angrily said that… “not any and everybody can come in here…that this was a serious place…!”

I said that I was there to check on the container watchers!! She eventually said that I had to park my car on the road, she was joined by a blue-clothed rank on the road who said “…this man feel he can do what he wants… he needs somebody to slam him down…!”

I parked on the road while hearing this abuse and threats, walked into the compound, spoke with one of the watchers and eventually sat with others under the shed.

The Special Constable had followed us around when I viewed the containers then left and came back in a few minutes to demand that I leave the compound!! I refused saying again that I was a commissioner and that I had every right to be there!! She left after saying “…You are a liard big man…”

I need not remind you of the recent incident where roughing up and manhandling by the police at the [Arthur Chung] Convention Center resulted in a torn left shoulder and elbow ligaments had me seeking medical attention and the necessity of using an arm sling!

I feel threatened and uncomfortable around certain Police ranks. I have had the unfortunate experience of being told, on asking a police officer, [acting Commander of Region Four – Subdivision ‘A’ (Georgetown), Phillip) Azore, for police accompaniment from one police barrier to the next that I had to do so at “…your own risk”.

I had further negative and personal interaction with Azore at the Convention Center at the incident there!

I believe that I cannot rely on the service and protection, and co-operation, that I have had with the police force over many years as: Chief Operations Officer at LINMINE, Commissioner and Chairman of the Guyana Geology and Mines Commission, Member of Parliament and Minister of Public Works and, until lately, as a Commissioner of the GUYANA Elections Commission.

I now feel threatened and targeted by elements in the Guyana police force.

I am pursuing advice in relation to these issues and incidents!

In the meantime I want to rely on you to have your police provide me with the service, protection and respect which I deserve as a citizen and a Statutory Commissioner of an Independent Constitutional Commission!!