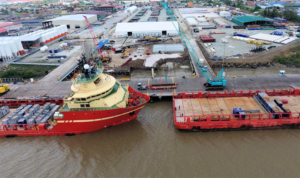 According to former Minister of Natural Resources, Raphael Trotman, the Muneshwers’ shorebase erected at Houston (Demerara-Mahaica) is unable to supply the needs for Liza Phase One. These and other details were revealed to the Parliamentary Sectoral Committee on Natural Resources in 2018.
During that meeting Trotman had told parliament, “What we have at Muneshwers Limited, now, which is already causing major traffic accidents and traffic jams every day, is only to service the Liza-1 field. The Liza-1 field has approximately 1.8 billion barrels of oil because it is going to be tied with another field, Payara, but we are still talking about another two to three billion barrels of oil that would have to be developed.”

He had also noted Muneshwers’ shorebase is already at its capacity, and for this, Trotman had indicated that the A Partnership for National Unity + Alliance For Change (APNU+AFC) had initiated the process of scouting other locations which could also serve as shorebases.
“This is why I am saying that Government wants to ensure that, from the Essequibo to Berbice, there is something in each so that the country grows in a balanced way and that everything is not centralized in Georgetown,” Trotman had indicated.

Notably, former Trinidad and Tobago Minister of Energy, Kevin Ramnarine, had warned Guyana about its need to prepare for the intense shorebase demands.
During his first appearance on Kaieteur Radio’s ‘Guyana’s Oil and You,’ Ramnarine had noted that Guyana is expected to have five floating production storage and offloading (FPSO) vessels in the next five years. Ramnarine had said that the shorebase demands that these oil ships will need is expected to be significant.
Expounding further, the former Minister had said that Guyana has the Liza Destiny FPSO offshore and another, the Liza Unity, is under construction. Along with the Liza Destiny, there are four drill ships and about 25 support vessels.

“So there is quite an armada out there. Support is being provided by the Muneshwers shorebase at Houston, but there will be a need for more shorebase services by 2025,” Ramnarine had expressed.
The former minister had said that Guyana has to lend serious thought to getting shorebase infrastructure in place. Further to this, Ramnarine said that Guyana is expected to reach its production peak, which would be sometime in the later part of this decade. In this regard, he recalled that international consultancy firm and trusted data provider, Wood Mackenzie, had said that Guyana would become the 11th nation in the history of the world to produce over one million barrels of oil per day.

Taking this into consideration, he had said that Guyana has to prepare its industry to be equipped with robust institutional capacity and legislation. He had acknowledged that the Energy Department has made some moves in this direction but noted at the same time that it should have been in place since 2015. “The country is therefore a bit behind the curve at this time,” the now business studies lecturer said.
Ramnarine also said that it is critical that Guyana does not find itself in a place where the industry grows exponentially, but the capacity to manage it does not. He said this was one of the blunders made by his home country while adding that Guyana has the good fortune of having borrowed experience as it endeavours to do better.