Just days after his arrest, Colvin Heath-London’s legal counsel has brought claims that it was the former Chief Executive Officer (CEO), Horace James, now deceased, who authorized the amendment to the state-owned National Industrial and Commercial Investments Limited (NICIL) land leases presently at the center of police investigations into the giveaway of prime state lands at Peter’s Hall.
In a detailed release, the former NICIL CEO’s Attorney, Nigel Hughes, stated that London in the company of his lawyers went to the Criminal Investigation Department (CID), Police Headquarters, Eve Leary last Friday and was immediately arrested for conspiracy to defraud.

According to Hughes, at the time of the execution of the leases in question, London was not the CEO. That office was held by former CEO, James, who died back in 2019, while London functioned as the head of the Special Purpose Unit (SPU).
Electronic copies of NICIL’s Board meeting minutes and records on January 15, 2018 were provided to the police. According to the Board minutes, James, then NICIL’s CEO, informed London of plans on stream for the Peter’s Hall area to be designated as an industrial park in support of Guyana’s new oil and gas sector.
It was also noted that James “opined that national’s inability to secure capital to facilitate business alliances such as joint venture arrangements may be stymied. It was therefore put forward by the CEO (James) that lease transactions should be amended to facilitate subletting thus creating a more competitive platform for local companies and nationals to benefit from this new business opportunity.”

Further, it was reportedly decided at that very Board meeting that the NICIL CEO would “treat with commissioning of valuation and survey reports, preparation of leases to qualified applicants to facilitate onward subletting by all approved leases” and further, “Industrial Parks Lease Transactions to be formulated immediately for the Peter’s Hall area and such areas as Berbice and Demerara were also slated as possible industrial park developments sites to be commissioned.”

“The questioning of Mr. London continued with the further questioning about leases which did not contain the requirement to seek the written approval of NICIL before subletting of the property,” Hughes continued.
According to the Attorney, the only allegation put to London is that the clause, which required the written permission of the lessee to sublet, was not included in some contracts.
He added that it was pointed out to the investigating ranks that the omission of the clause, which did not require the written permission of NICIL is not a criminal offence and had been sanctioned by the Board as per the board’s decision.

A request was made for the identification of any instrument, which purported to prohibit, restrict or circumscribe the inclusion of a clause, which permitted the subletting of properties, which had been leased by NICIL, but the investigating officer reportedly stated that he was not provided with such.
Added to this, Hughes stated that London was informed that the allegations brought to him were made by the current NICIL Board. According to Hughes, “The State has not lost any revenue, neither has any allegation to date to Mr. London that the rent was below the market rate.”
In addition, Hughes noted that NICIL’s former CEO, Winston Brassington, testified under oath on November 12, 2020 saying, in relation to NICIL and its powers that “the articles of incorporation which guide the operations of the entity (NICIL) gives it broad and sweeping powers to do practically anything under the sun.”

Hughes also pointed out that London’s request for bail was denied on two occasions and they were told that an extension was being sought to detain him for a further 72 hours.
His arrest forms part of a probe led by Minister of Legal Affairs and Attorney General (AG), Anil Nandlall, into the sale of state lands during the tenure of the former Coalition government.
Both London and Guyana’s former Finance Minister are accused of playing a hand in not just the giveaway of the lands at Peter’s Hall on the East Bank of Demerara (EBD) but also at Ogle on the East Coast of Demerara (ECD).

Though these prime lands were worth billions of dollars, NICIL vested large parcels in the hands of a number of investors, receiving a fraction of the payments in some cases and in others, none at all.
Guyana’s State Lands Act clearly stipulates that whenever state lands are leased, the lease agreement must indicate that the lessee “SHALL NOT” part with lands (possession) or “SHALL NOT” assign the interest in the said agreement without the consent of the state.

It states, too, that in the event that there is going to be a transfer to a third party, the state reserves the right to step in and repossess the lands, reverting ownership back to the state. However, that very clause was altered in the lease agreements currently at the center of these investigations. The leases were altered to say, “the lessee may divest the land, may part with possession, may assign it to a third-party interest.” 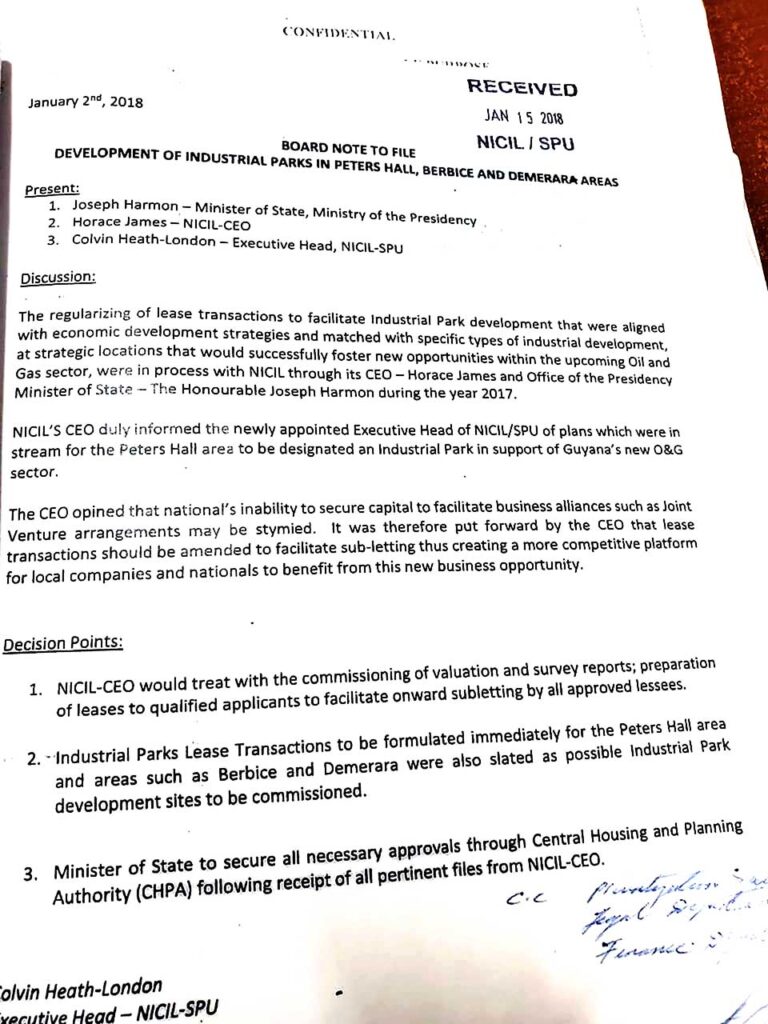