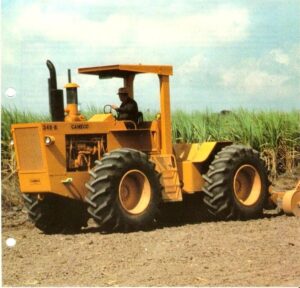 The state-owned Guyana Sugar Corporation (GuySuCo), which manages a number of estates in Demerara and Berbice, is reportedly moving to upgrade its fleet of equipment.
According to persons familiar with the situation, GuySuCo’s board is expected to shortly consider a major purchase from a foreign supplier of 44 tractors.
The price tag on the Cameco tractors, according to information, is around $33M for each.
An official from the Ministry of Agriculture yesterday said that the matter has not been brought to the attention of the ministry.

In any case, the official said, the matter will still have to engage and get the green-light of GuySuCo’s board before it comes to the ministry and then to the Cabinet of Ministers for approval.
Kaieteur News could not immediately make contact with GuySuCo’s Chief Executive Officer (ag), Sasenarine Singh.
Online searches identified Cameco equipment as being ideal for the sugar-cane industry.
However, this newspaper was told that the recommendation for the use of the Cameco tractors as against the locally-available John Deere ones was made some time back with a representative of GuySuCo travelling to the US to meet with the company.
John Deere tractors are reportedly selling for less than half of the $33M price stated for the Cameco tractors.

The purchase, if approved, will add up to a significant $1.5B for GuySuCo.
The industry, once the mainstay of the economy, has fallen on hard times, after a crippling price cut from the Europe market, and then loss of the preferential market there. A lack of capital, poor agriculture and corruption was blamed and the previous Government under David Granger shuttered four estates – Skeldon, Rose Hall, Enmore and Wales.

It had led to a loss of 7,000 workers with entire communities complaining bitterly of the fallouts.
The Irfaan Ali administration has, however, vowed to reopen the estates and make them profitable again, albeit in private hands. In fact, the government has asked for investors to make proposals.
GuySuCo has been accused of being top-heavy with its management, with cronyism and corruption blamed also for its financial woes.